This section highlights some of the C²DH’s notable achievements and milestones in 2020. It covers events, publications, academic outputs and outreach activities.

On 20 January 2020, the Europe Direct Information Centre (EDIC) University of Luxembourg was inaugurated by Nicolas Schmit, European Commissioner for Jobs and Social Rights. Based on Belval Campus, the EDIC office is coordinated by the C²DH and managed by Elena Danescu. The EDIC University of Luxembourg aims to interact with students, researchers, teachers and the general public on issues related to the European Union’s history and current affairs and to stimulate reflection on potential future challenges. 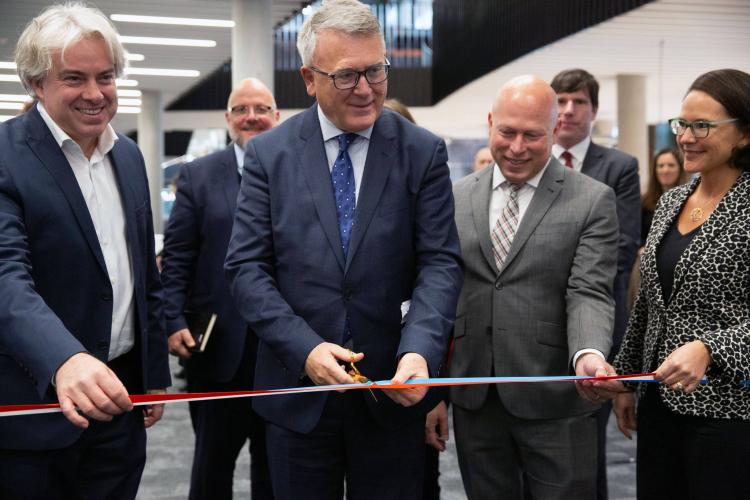 During the COVID-19 pandemic, the C²DH launched the “Yes we care” project to collect accounts from people working in the medical and healthcare sector.

This oral history project is based on a longitudinal approach, with regular interviews being conducted with the same people via a series of indicative questions. The aim is to compile a personal oral diary of healthcare workers in Luxembourg, to develop a clearer picture of their day-to-day work and the workings of hospitals and healthcare systems in pandemics. Approximately 300 interviews were recorded in 2020. The #yeswecare project, initiated by Benoît Majerus, is being conducted in cooperation with the “Who cares in Europe?” COST Action and Indiana University–Purdue University Indianapolis. 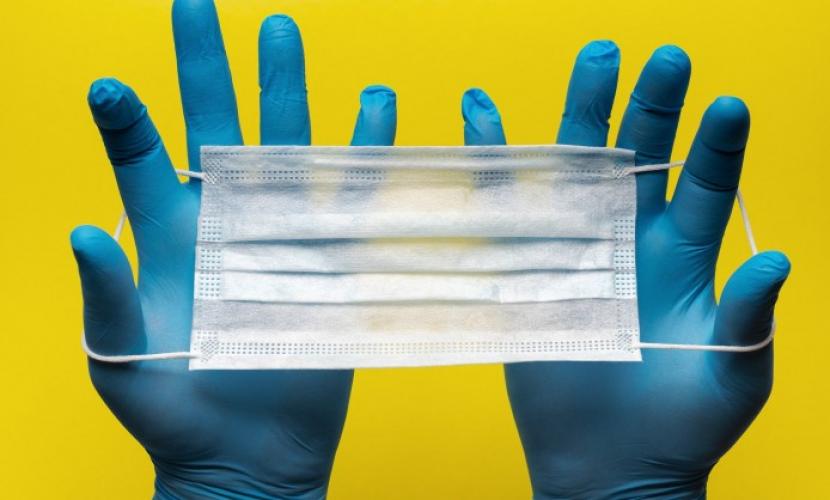 The COVID-19 pandemic is an event whose historic dimension is immediately obvious. With the crowdsourced memory bank covidmemory.lu, launched in April 2020, the C²DH offers all people living or working in Luxembourg the opportunity to share their experiences and preserve them for future generations. The aim of the project is to document the impact the pandemic has had on peoples’ lives and social relationships. It facilitates the analysis of local knowledge and perceptions of the COVID-19 crisis so as to shed light on the impact of coronavirus on society. In 2020, the project received widespread coverage in the Luxembourg press and more than 300 testimonials were collected. In addition, two workshops were held with the organisers of other national and international COVID-19 memory collections to initiate scholarly discussions and collaborative reflections. The project is led by Stefan Krebs. 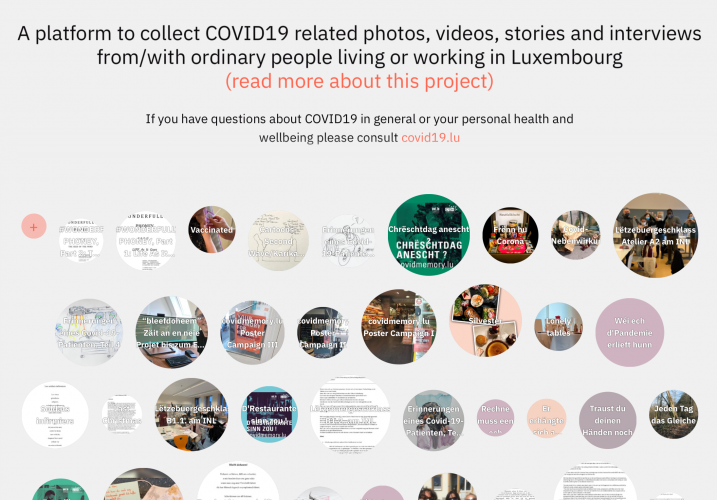 In June, the C²DH launched a project entitled Public History as the New Citizen Science of the Past (PHACS), which focuses on the production of history from a public perspective. This project, led by Thomas Cauvin, develops public history and participatory models for interpreting the past. It aims to facilitate interactions between academics, cultural institutions, groups, associations and the general public as a means of democratising not only access to but also the production of history. The PHACS team will develop and evaluate innovative participatory frameworks to empower groups, associations and users and engage them in critical debates on the contemporary history of Luxembourg and Europe. The project is funded by a five-year ATTRACT research grant (2020-2025) from the FNR. 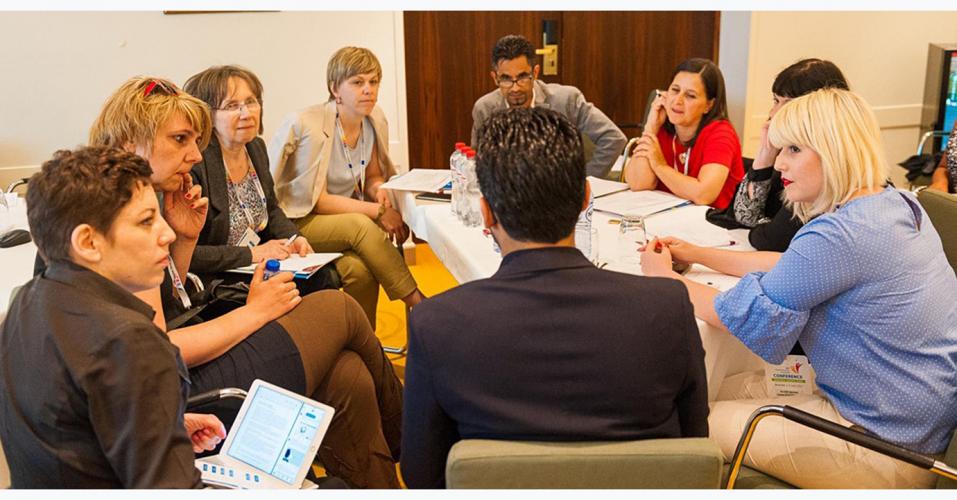 On 29 June 2020, the C²DH and POST Luxembourg inaugurated the virtual exhibition 175 Joër POST, which looks at the history of the Entreprise des Postes et Télécommunications du Luxembourg since it was set up in 1842. The virtual exhibition, produced by Aurélia Lafontaine, a PhD student at the C²DH, explores the early days of the Luxembourg postal service and the major milestones in its development, including its involvement in the satellite industry, the digitisation of telecommunications networks and the introduction of mobile telephony and the internet. A wide range of historical documents, maps, photos and films are presented alongside explanatory texts. 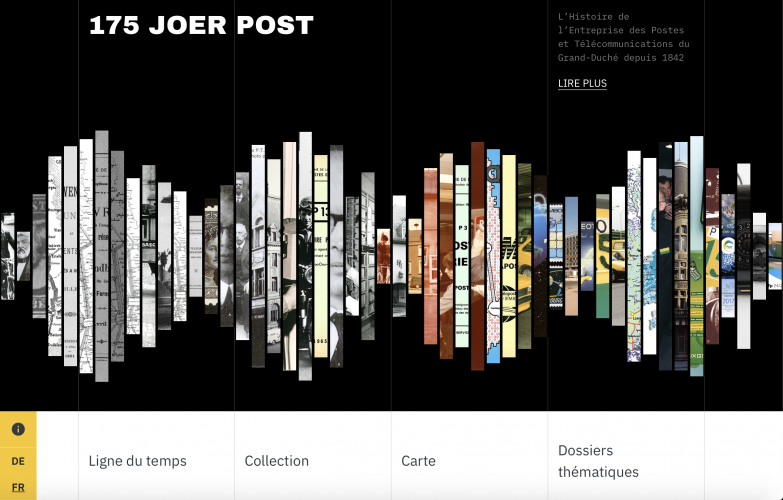 East Belgium 1920-2020 is a virtual exhibition about the history of the Eupen-Malmedy-Sankt Vith region since it went from being German to Belgian in 1920. The virtual exhibition, launched on 20 September 2020 with an online event, is the result of a collaboration between the C²DH, the German-speaking Community of Belgium and the Zentrum für Ostbelgische Geschichte. The website addresses a broad spectrum of users with varying levels of expertise.

In addition to the virtual exhibition, Christoph Brüll and Andreas Fickers looked into the region’s past in eight radio essays in collaboration with broadcaster BRF. 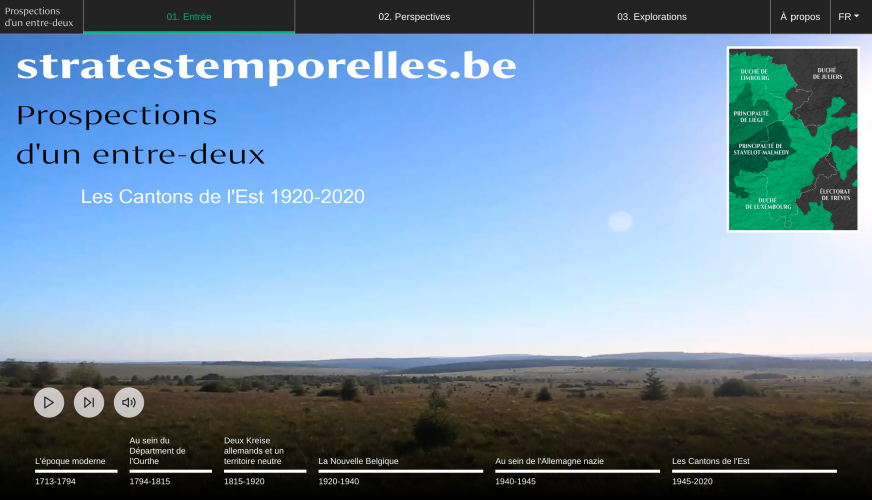 The C²DH aims to take history beyond the confines of academia. From 26 September to 23 October 2020, a temporary history lab was hosted at Annexe22 in Esch-sur-Alzette as part of the programme of events for Esch2022 European Capital of Culture. Researchers from the “Remixing Industrial Pasts in the Digital Age” project organised a number of participatory events to explore the history of the Minette region. The researchers invited the general public to share their historical documents and personal memories. Visitors were also given a chance to find out about the life stories of six people with links to the Minette region in the past and present through an interactive video installation designed by Tokonoma. There was an opportunity to take self-portraits with an analogue camera and record sound postcards of Esch on a vintage Cartavox recording machine from 1957. With more than 600 visitors, the lab was a great success and opened up new avenues for future research. 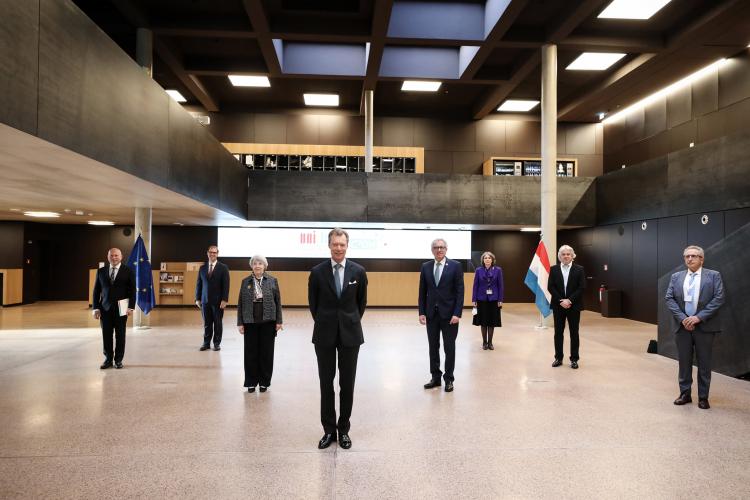 The guide looks at the history of Esch-sur-Alzette, especially its houses and shops, its administrative, political, industrial, religious and cultural buildings, and its cemeteries, parks and gardens. The texts are accompanied by historical images and contemporary photos.

The guide is also complemented by a series of 50 short documentary films presenting key sites and monuments in Esch-sur-Alzette. 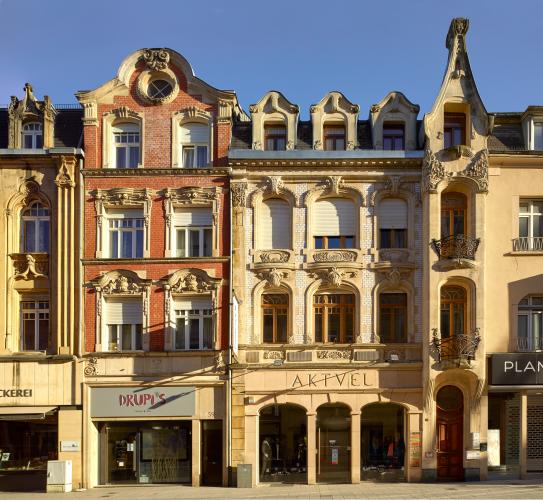 The Timecode Indexing Module (TIM) was presented at the Oral History Association Annual Meeting in Baltimore in November 2020. TIM is a tool for indexing and annotating interview recordings. Indexing at the timecode level is an increasingly popular practice for accessing oral histories in synchronised multimedia display systems, like OHMS and Aviary. TIM takes a new approach to building an index, using a free-form editing environment for text combined with flexible tools for establishing timecodes. Whether for online publication, research or both, an index can be built without any preset structures and with whatever text resources are available (e.g. existing notes, annotations or transcripts – even imperfect ones). TIM is already being used by indexing professionals in Europe and the US. The project is led by Douglas Lambert in partnership with Zack Ellis (TheirStory) and supported by the C²DH. 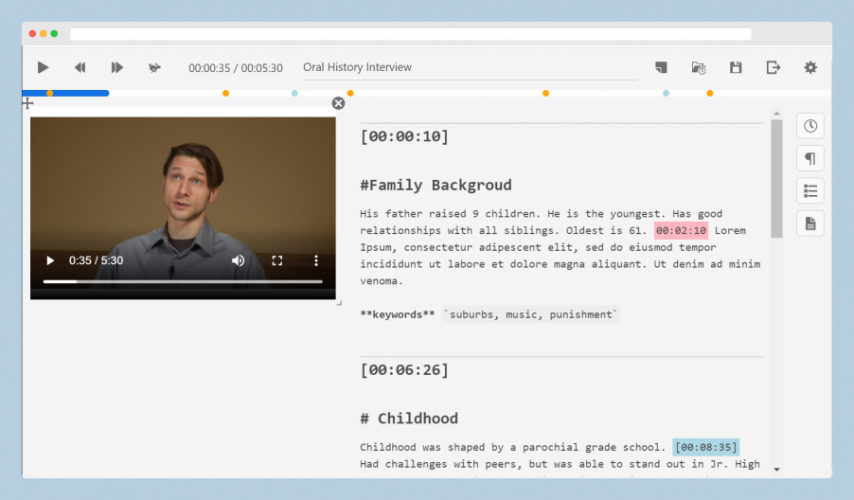 In 2020, the University launched the Institute for Advanced Studies (IAS) with the aim of strengthening its interdisciplinary research. In connection with the IAS, the C²DH is involved in an Audacity project, LuxTIME (the “Luxembourg Time Machine”), whose main objective is to explore the potential for building a national platform to dive into the country’s complex past with the help of digital tools and data from many different disciplines and fields.

Based on a digital dataset that will include information from three different fields and research perspectives – ecohydrology, medicine and history –, LuxTIME will use a local case (the industrialisation of the Belval/Minette region) as a testbed for methodological and epistemological reflections on how to study the impact of environmental changes on the health of the local population from a long-term perspective. 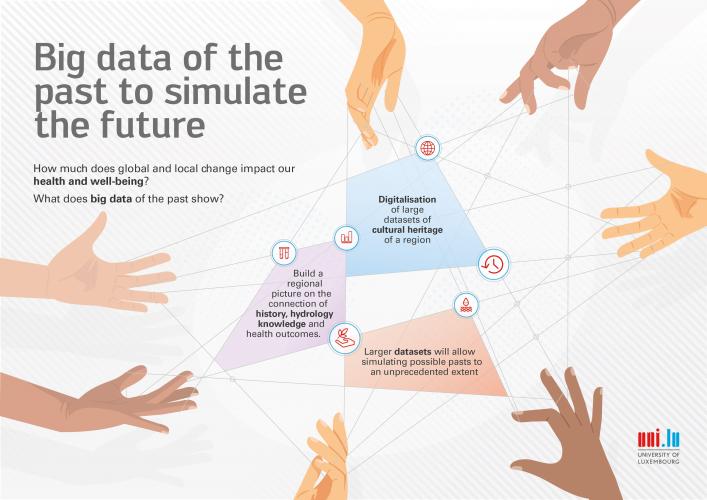 In November 2020, the C²DH and the De Gruyter publishing group launched the Journal of Digital History (JDH). The JDH is intended to serve as a forum for critical debate and discussion in the field of digital history by offering an innovative publication platform and promoting a new form of data-driven scholarship and transmedia storytelling in the historical sciences. As an international peer-reviewed open access journal, the JDH will set new standards in history publishing based on a novel multi-layered approach. The JDH is a double-blind peer-reviewed journal. 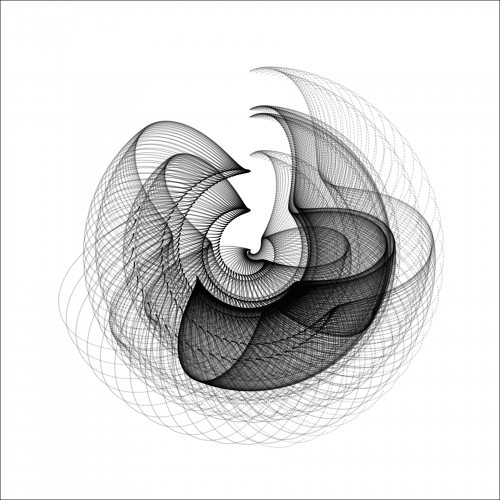 The digital turn has led to a proliferation of information, changing the way in which we access, view and analyse historical sources. This observation led the C²DH to develop Ranke2, a teaching platform that offers guidance on how to apply source criticism to digitised and born-digital historical sources. Named after one of the founders of modern historical scholarship, Leopold von Ranke, the resource offers a series of teaching modules, each covering one or more specific data types and consisting of an animation, a quiz and a series of assignments. The content is directly accessible and can serve the needs of students, lecturers and independent learners. In 2020, an international outreach campaign was launched to promote the use of Ranke2 in academic contexts all over the world. Initiated by Andreas Fickers, the project has been further developed by Stefania Scagliola and her team. 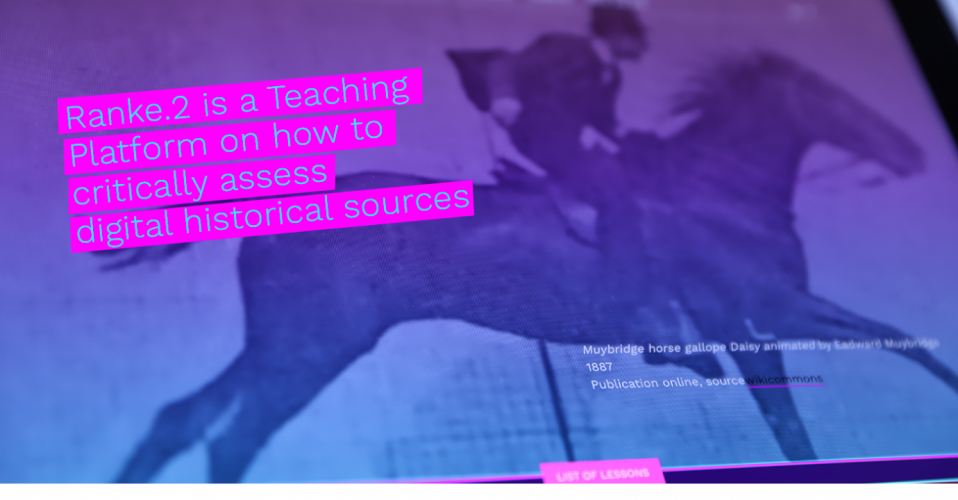 Virality plays a central part in our current digital cultures. However, it is not a new phenomenon; it has been embedded in web practices since their very early days. Building on the legacy of past web cultures, the project “A history of online virality” (HIVI) aims to study this intangible heritage through time and space, from the early Web in the 1990s to Instagram and Twitter. HIVI places significant emphasis on born-digital heritage (in particular web archives) in addition to more traditional sources. The project, led by Valérie Schafer, was submitted to the FNR’s multi-annual thematic research programme CORE in 2020 and will start in March 2021.

The C²DH shares and promotes the results of its research via a wide range of publications.