One of the C²DH research success stories in 2020 was the replication of a Kinora, an early 20th-century motion picture device designed for home use. The Kinora first emerged at the end of the 19th century and developed into one of the most popular “home movie” machines of the early 1900s. To gain a better understanding of how the Kinora works and how it was made and used in the past, media historian Tim van der Heijden collaborated with engineer Claude Wolf and student assistant Morgane Piet from the Department of Engineering (DoE) to produce a working replica of this special object in the history of early cinema. 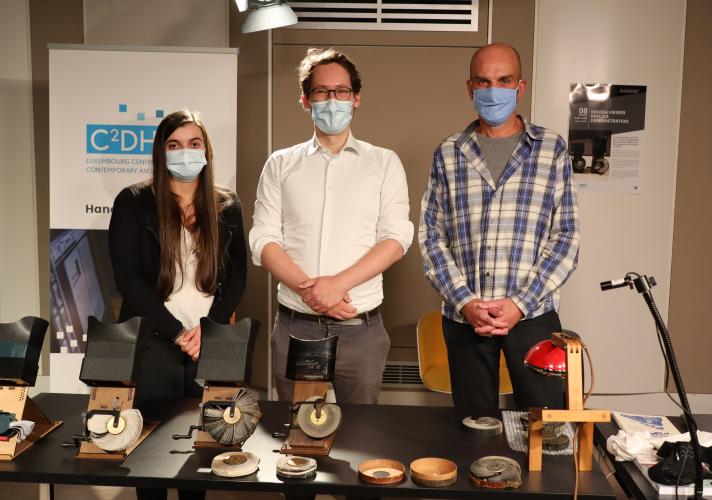 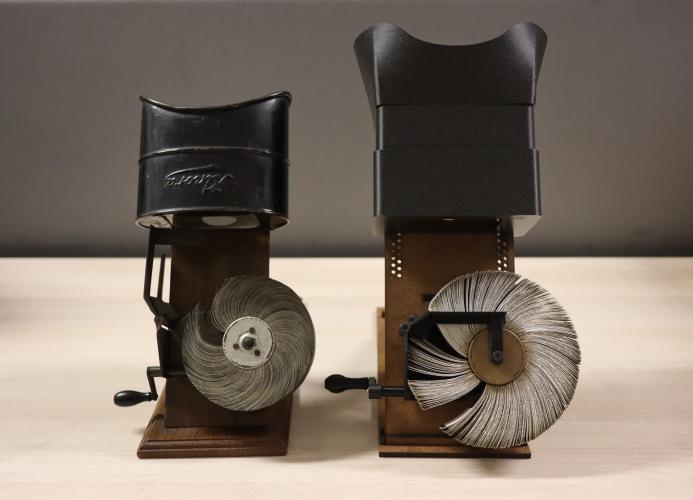 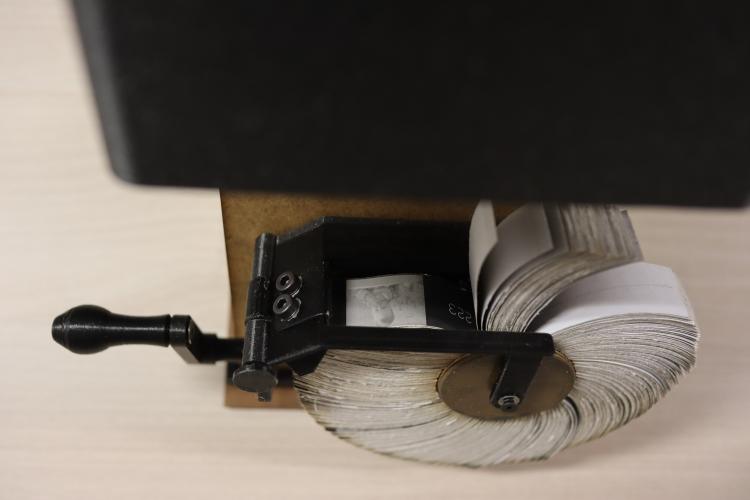 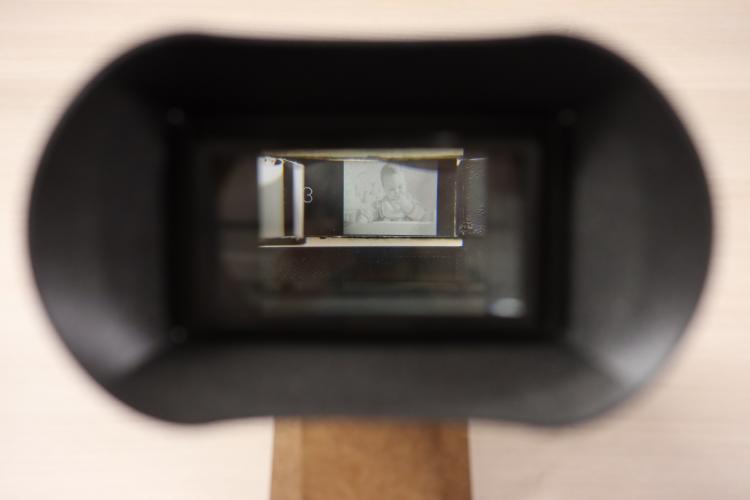 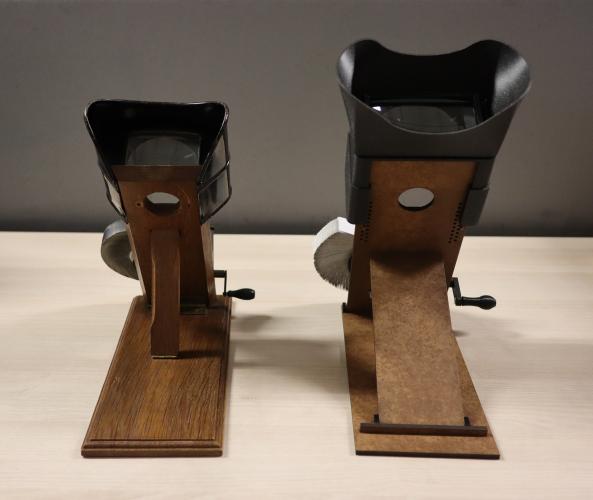 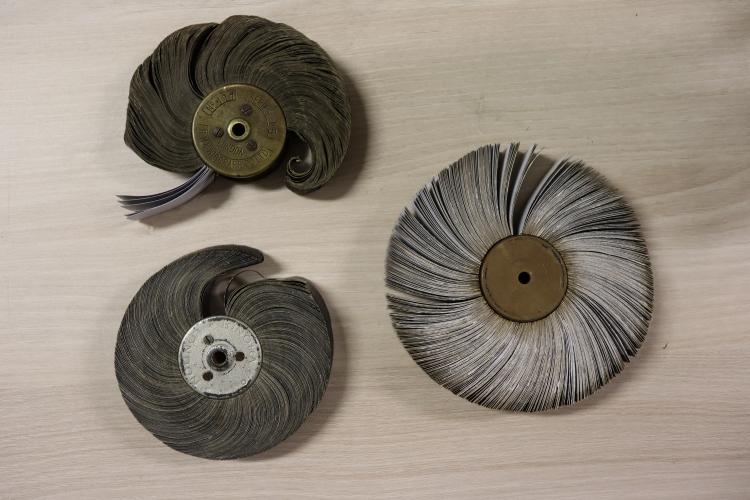 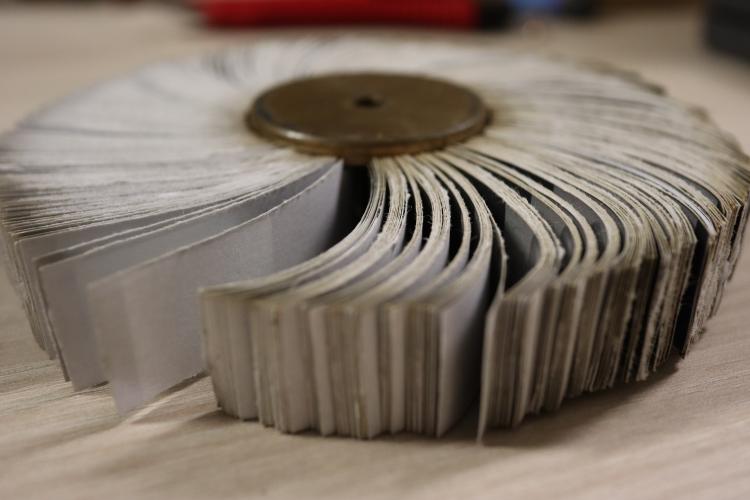 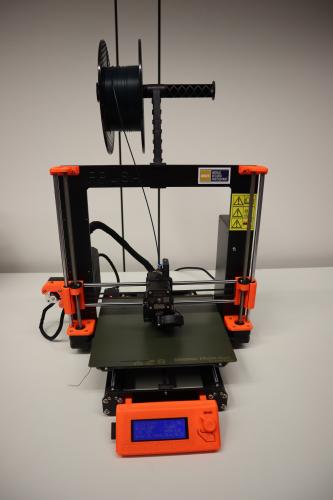 The Kinora was one of the first technological devices that allowed people to watch moving pictures at home. Originally invented and patented by Auguste and Louis Lumière in 1896, it was an adapted version of the Mutoscope. Similar to the Mutoscope, the Kinora viewer made use of a flipbook mechanism in which a series of paper-based unperforated photographs are attached to a wheel. By turning the wheel and looking through the viewer, one could watch a series of photographs in motion. Kinora viewers were manufactured in France and England. Hundreds of Kinora reels were produced for domestic entertainment, mostly printed reproductions of professionally shot films. Later it also became possible for people to make their own Kinora “living pictures”, either at the company’s photographic studio in London or by means of the special Kinora camera that was released in 1908.

The replication of the Kinora viewer was part of the research project “Doing Experimental Media Archaeology” (DEMA). The goal of the DEMA project is to explore the heuristic potential of historical re-enactments and hands-on experiments as an object-oriented and sensorial approach for the study of past media technologies and their histories of use. The project includes two postdoctoral studies that explore visual and audio media technologies. While DEMA researcher Aleks Kolkowski is focusing on historical sound amplification devices from the pre-electronic era, Tim van der Heijden is investigating visual media technologies, including early 20th-century home cinema and amateur film devices.

To reconstruct the Kinora motion picture system and its practices of use, the DEMA project purchased an original Kinora viewer from c. 1907 and five accompanying reels. These original historical objects served as models in the replication process that took place in the Engineering 3D Lab. By means of the latest 3D modelling and desktop manufacturing engineering techniques, the viewer mechanism and the composition of the Kinora reel were reproduced. To make the new Kinora reel, 640 small photographic cards were printed and mounted on the reel’s core. The black-and-white imagery was produced in another DEMA experiment, involving the historical re-enactment of a 16mm home movie. In combining historical enquiry with a hands-on technical approach, the process of replicating the Kinora turned out to be very useful for understanding the device’s mechanism and unique characteristics. For example, it revealed the purpose of the curvature of the 640 photographic cards in flattening each of the pictures the very moment they become visible through the lens of the viewer.

Demonstration of the Kinora viewer replica

On 8 September 2020, a virtual demonstration was held to present the results and the process of making the Kinora viewer replica: https://www.c2dh.uni.lu/events/dema-demonstration-kinora-viewer-replica

On 9 October 2020, the C²DH, capybarabooks and the Esch-sur-Alzette town council presented the Guide historique et architectural Esch-sur-Alzette at the Infofabrik in Esch. In this 480-page guide, Georges Buchler, Jean Goedert, Antoinette Lorang, Antoinette Reuter and Denis

The Temporary History Lab, housed in the Annexe22 pavilion on Place de la Résistance in Esch from 26 September to 23 October, was the first milestone in the research project “Remixing Industrial Pasts in the Digital Age” (REMIX). The project, funded by Esch2022 a.s.b.l., was one of the initiatives organised as part of Esch2022 European Capital of Culture.