Report of the fifth Forum Z – “A new narrative for Europe: Quo vadis?”

The fifth Forum Z focused on those who tell the story of Europe. Professors and researchers gathered to share their thoughts and discuss with the public about the challenges of developing a new narrative for Europe in the digital age.

The event was organised by the Luxembourg Centre for Contemporary and Digital History (C2DH), in partnership with Paris-Sorbonne University’s LabEx-EHNE and the Historical Archives of the European Parliament.

This latest Forum Z, which focused on the new challenges facing historical narration in the digital age, was hosted on the University of Luxembourg’s Belval Campus at the Luxembourg Centre for Systems Biomedicine (LCSB). It took place in French, German and English and was a resounding success, attracting around 60 people from the academic, research and teaching communities as well as the media.

The opening address was given by Prof. Dr Andreas Fickers, Director of the Luxembourg Centre for Contemporary and Digital History (C²DH), who gave a broad outline of the event and identified some of the major issues historians have to grapple with in this new narrative age.

Prof. Dr Bussière started by emphasising the fact that today’s historians need to rethink the history of Europe in light of the crisis currently facing the European Union, and that placing the history of the European project within the broad sweep of history as a whole involves adopting new approaches to narrating history.

This is the main aim of EHNE project, which was set up to develop a new historiography of Europe. The project is aimed at the academic community as well as teachers, politicians and interested citizens. A large team of French and European researchers is tackling this issue by placing the current European integration process within a broader historical perspective, avoiding conventional paradigms such as war, politics and material civilisation.

By focusing more closely on the history of international political relations, EHNE aims to move away from the traditional chronological and geographical frameworks applied to European political history. This approach has enabled the researchers to explore the development of a public and political space and the images and debates associated with it, while also analysing the feelings of mistrust and conspiracy that are so prevalent in our society. Rethinking the history of Europe also means giving a voice to the losing side in the Europe’s wars, since their narratives, memories and experiences have made a major contribution to building the Europe of today.

What is the alchemy of European identity, and how has this cumulative process developed? What if Europe was above all the product of material civilisation? What would be the resulting geographies, chronologies, players and historical processes? And what would be the role of technological transitions, an area in which the European Union is currently positioning itself as a champion? These are just some of the major research questions that the EHNE researchers directed by Prof. Bussière are working to address. 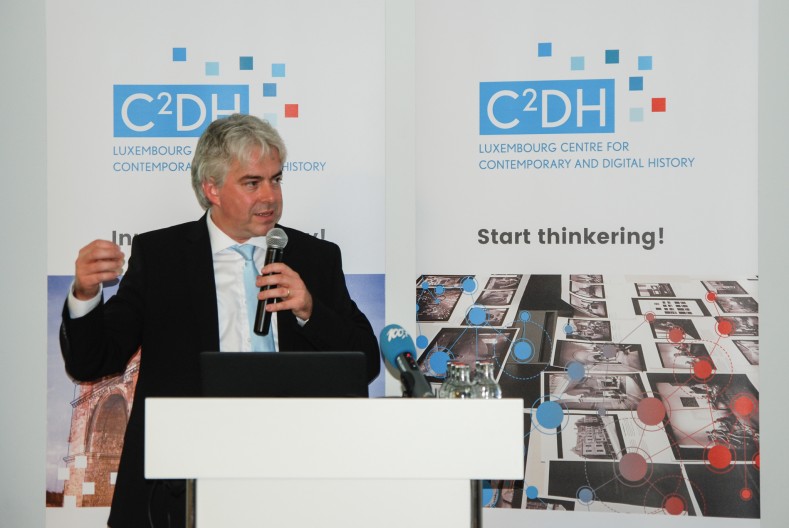 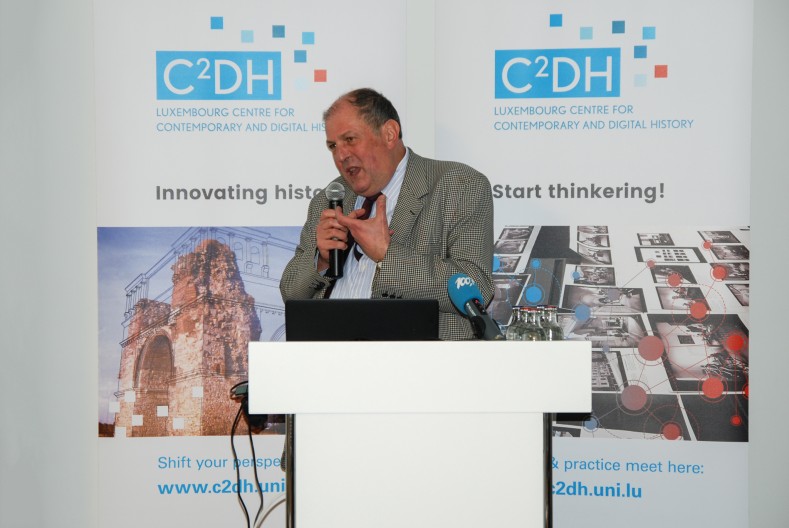 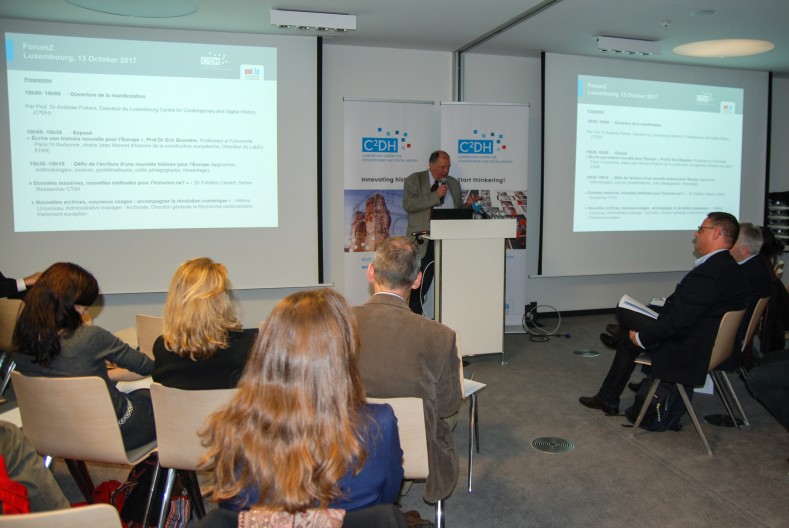 The session “The challenges of writing a new history for Europe” focused on the innovative approaches, methodologies, sources, themes, educational tools and networking that influence today’s historical narration

Dr Frédéric Clavert, Senior Researcher at the C²DH, spoke about “Données massives, nouvelles méthodes pour l’historien.ne?” (Big data – new methods for historians?). The emergence of big data as a result of new services such as social media has raised the question of how historians can make use of these data as sources. How can historians read and interpret these sources when they constitute a vast sea of data? This presentation described a project that involved collecting Tweets about the centenary of the First World War, providing a specific example of “distant reading” of big data (reading sources using computer methods) for historical purposes.

“Entre mémoire et histoire: les Archives historiques du Parlement européen face aux enjeux de l’histoire orale” (From memory to history: the Historical Archives of the European Parliament and the challenges of oral history) was the subject addressed by Dr Étienne Deschamps from the Historical Archives of the European Parliament. In 2009, the Historical Archives set up an oral memory project. From its initial aim of collecting accounts from former European Parliament Presidents, this project was gradually extended to include former Secretaries-General, MEPs and political figures who have played a major role in the European integration process. In methodological terms, before each interview, a thorough analysis of all the archives relating to the interviewee is carried out and a list of questions covering the key events and initiatives that took place during his or her term is drawn up. 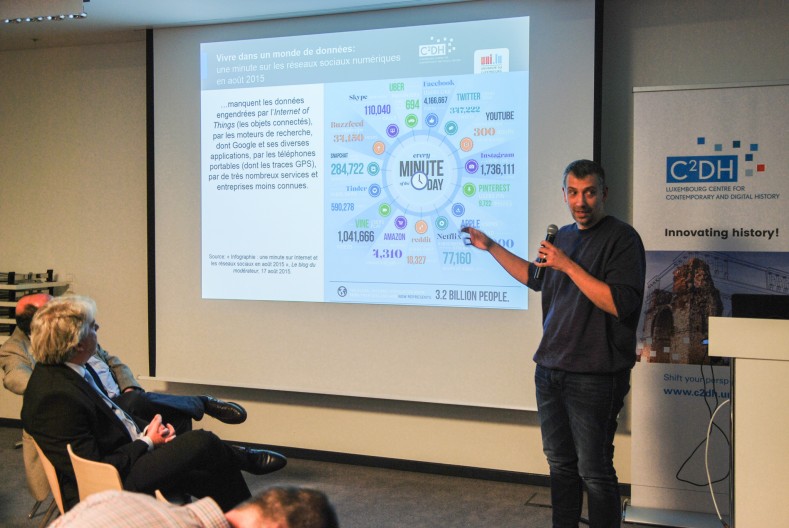 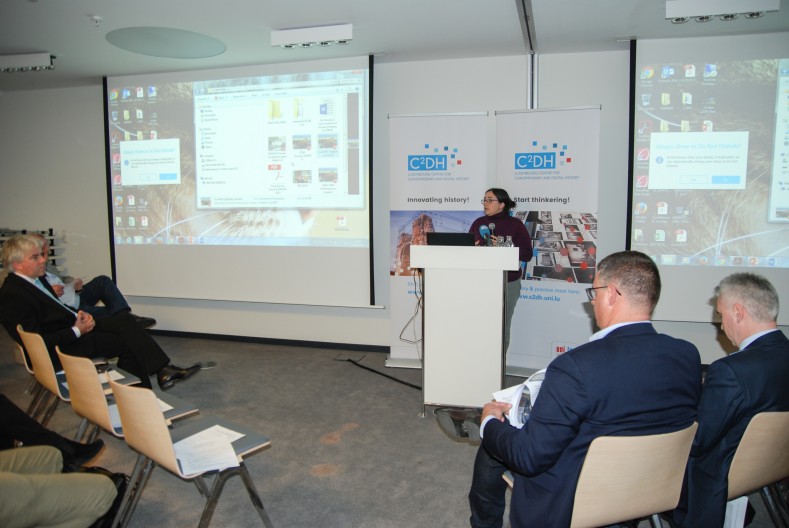 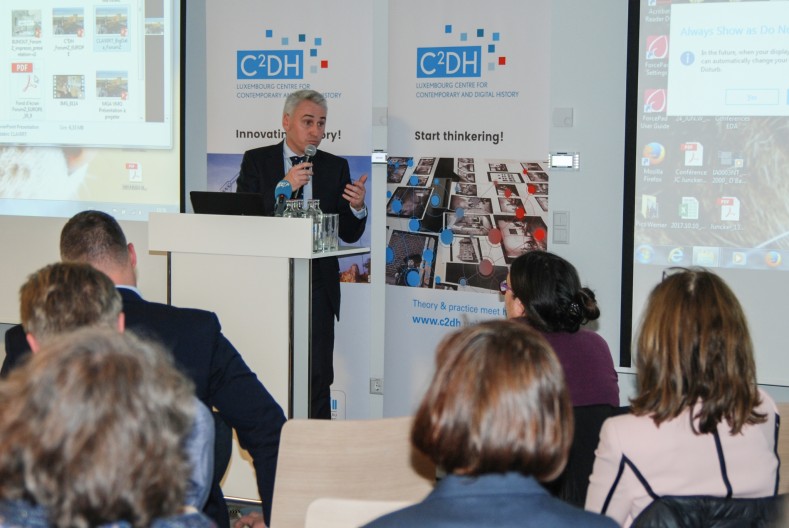 In his presentation “Introducing impresso. Media monitoring of the past”, Dr Marten Düring, a Researcher at the C²DH, gave an overview of the recently launched project impresso, set up together with partners EPFL Lausanne and the University of Zurich. In this project, the C2DH will work on novel technologies for the study of historical newspapers. Impresso aims to open up new ways of engaging with digital historical newspaper content and pave the way for new approaches to historical questions. The first objective of the project is to develop multilingual and time-specific text mining techniques to transform noisy and unstructured textual content into semantically indexed, structured and linked data. Subsequently, the project aims to develop a visualisation interface to enable the seamless exploration of vast amounts of complex historical data.

Estelle Bunout, a Research Associate at the C²DH, spoke about “The heuristics of distant reading for the history of anti-European ideas”. The impresso project relies on a co-design approach, involving historical use cases. One historical case study within the project will look at resistance to Europe, a subject that has previously received little attention. The absence of historiography in this area is undoubtedly caused by the difficulty of gathering sources on the topic. The research tools developed within impresso will enable researchers to search for people or key words within an article or, depending on the available metadata, search within titles or specific sections of a newspaper. Within the identified extracts they can then select those that deal with the European idea. This should provide a powerful resource for reconstituting the tensions around the European idea from the late 19th century to the 1950s.

Marco Gabellini and Victoria Mouton, Research Assistants at the C²DH, spoke on “Ressources numériques pour enseigner la décolonisation depuis 1945: enjeux géopolitiques et impact sur le processus d’intégration européenne” (Digital resources to teach about the process of decolonisation from 1945 onwards: geopolitical issues and the impact on European integration). They presented an ePublication that examines the milestones in the break-up of the European colonial empires since 1945, with a particular focus on French and British decolonisation. Their research specifically pinpoints how this decolonisation process influenced the European integration process. The ePublication includes a carefully analysed selection of more than 700 diverse multimedia resources, including archive documents, contemporary press articles, correspondence, extracts from memoirs, photos, cartoons and audio excerpts. These primary sources have been enriched with educational resources including explanatory synopses, maps, interactive timelines and a selected bibliography.

Prof. Dr Aristotle Tympas from the National and Kapodistrian University of Athens, Greece, explored the subject “Tensions of Europe: Technology and the hidden integration of Europe”. This integration is the result of transnational road and rail links and other transport networks, and also transnational links between energy and communication networks. Dr Tympas gave the example of potential accidents at nuclear plants in one EU country that were avoided by importing electricity from neighbouring (or even more remote) EU countries via transnational links. The history of hidden integration, a history of technological integration, has its own time framework which does not overlap with that of political history. Nationalistic and related perspectives are highly problematic in that they tend to overlook the fact that Europeans share long-term risks and benefits as a result of a material-technological state of affairs that has developed over decades and centuries of hidden integration. Ignoring this history can be very dangerous for all concerned. That is why the history of this hidden technological integration should become a central aspect in a new narrative of Europe. 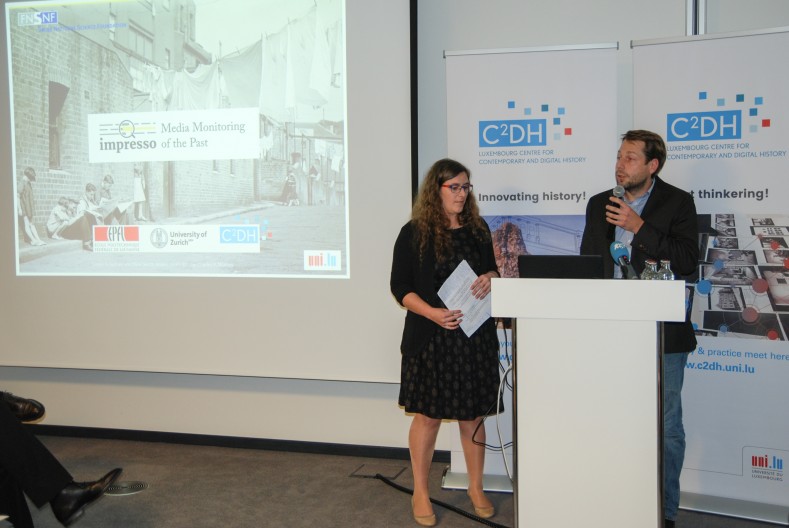 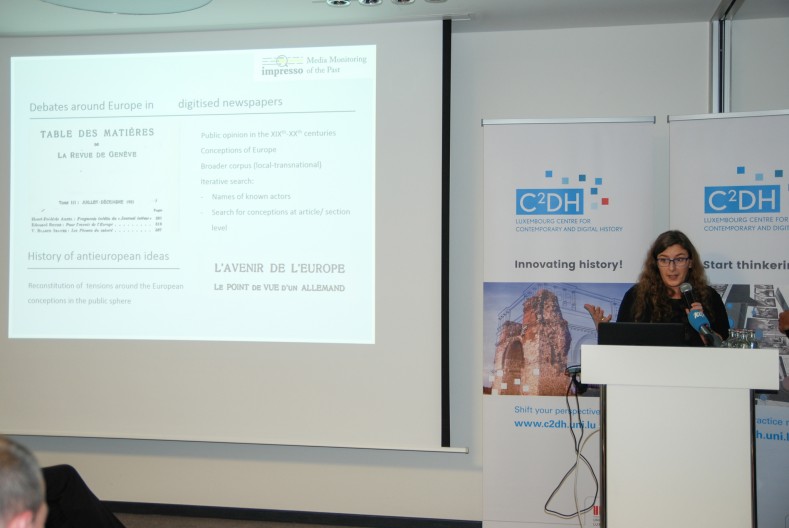 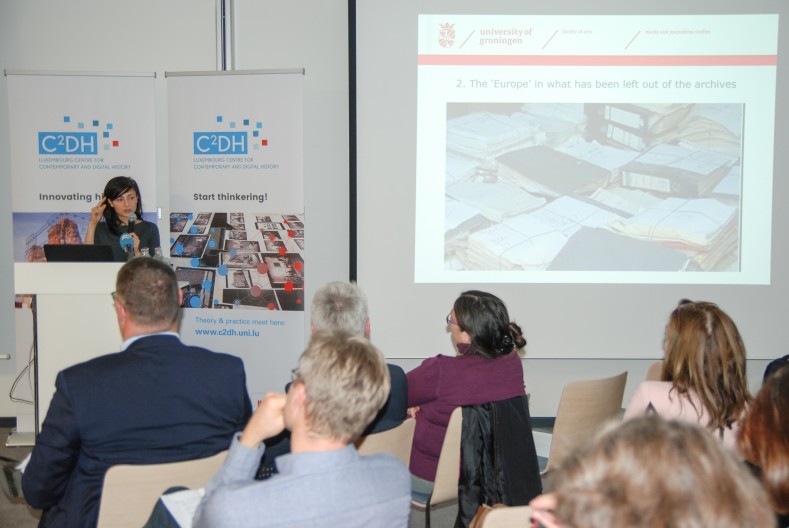 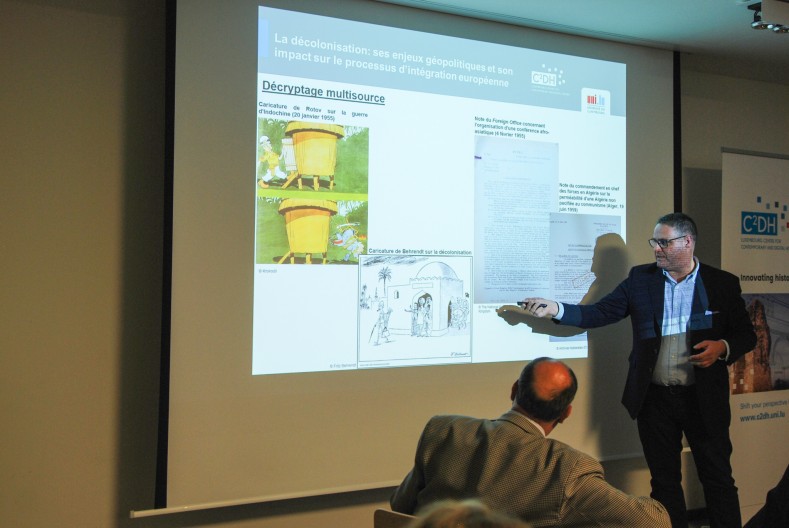 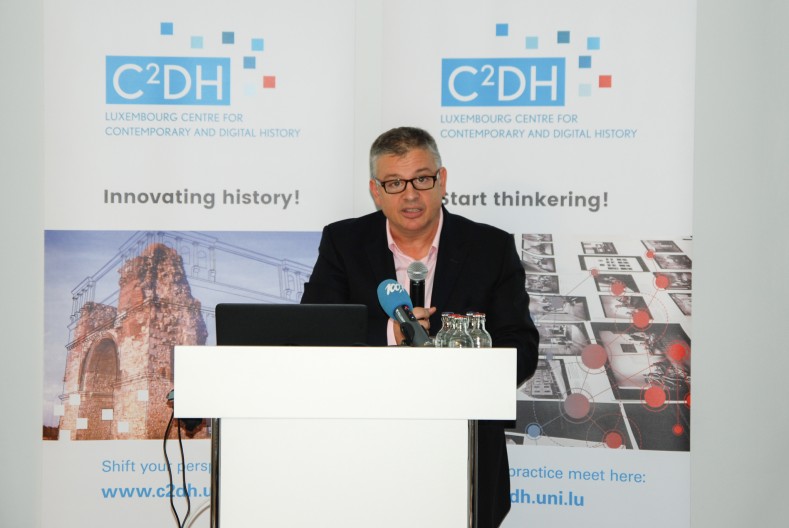 The event drew to close with a debate between the speakers and the audience, moderated by Prof. Dr Andreas Fickers.

The internationally renowned Belgian artist Pierre Kroll, a freelance illustrator since 1985, narrates contemporary history through press illustrations and cartoons. He is a member of the Cartooning for Peace association, set up by Le Monde’s Plantu and the United Nations, and regularly publishes his work in the international press, especially Courrier International. He is also a regular guest on TV5 Monde.

Pierre Kroll was unfortunately unable to attend the fifth Forum Z because of his international commitments, but he contributed to the event with a video and virtual exhibition entitled “Raconter l’Histoire par le dessin de presse” (History as seen through press illustrations), featuring political cartoons on topical European events. 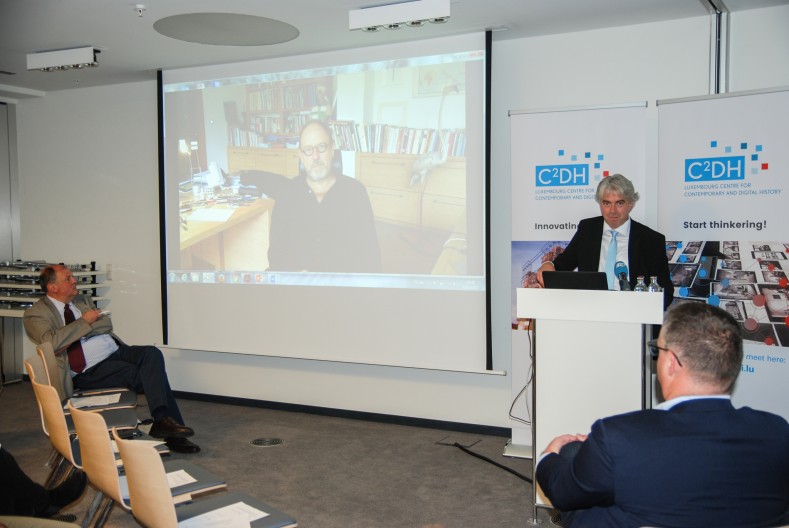 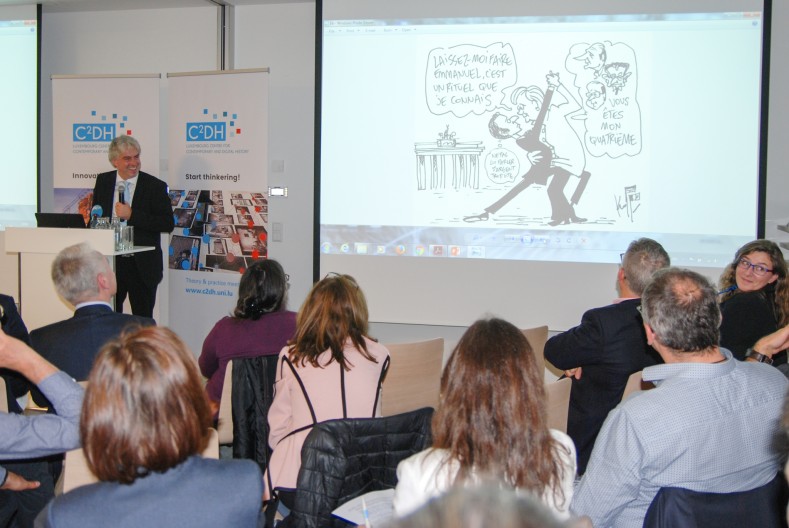 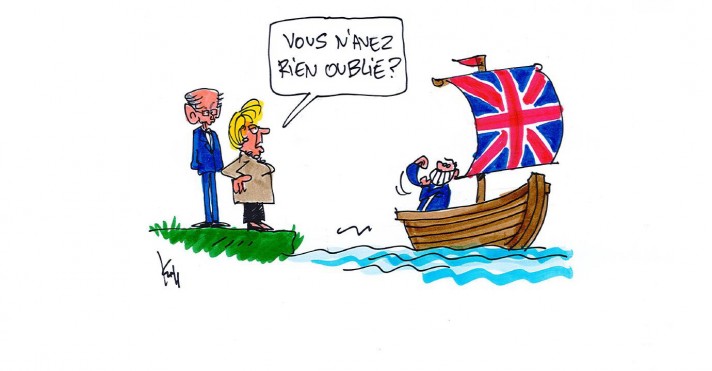 History as seen through press illustrations
Pierre Kroll is an internationally renowned press cartoonist. Check out part of his work on Europe here.
See the press cartoons