In quest of academic identities: my participation in the ISCH conference in Tallinn
MENU
Contemporary history of Luxembourg

In quest of academic identities: my participation in the ISCH conference in Tallinn

From 26 to 29 June 2019, I participated in a conference in Tallinn (Estonia) organised by the International Society for Cultural History (ISCH), where, in addition, I presented a paper on cultural policy in Luxembourg. This experience was part of a quest to better understand cultural history and my own research.

Last year, I had the pleasure to participate in the International Conference of Public History in Brazil in August, where I could present a research poster on the links between cultural policy and public history with the example of the Centenary of Independence in Luxembourg in 1939. This was only one aspect of my PhD thesis and I focused on how history was presented to a large public. Yet, I have not been doing history ‘with the public’. A couple of months before that conference, I participated in a public history summer school in Wroclaw, where I was invited to a round table. I was very humbled by this opportunity, as I did not see myself as a public historian and had no experience in this field, except for disseminating my research to a large audience.

In a certain way, 2018 was my public history year. While it certainly helped me to better understand public history, I was still having issues to classify my own research under any specific field, even if, in the end, it might not really matter. Though I feel now a bit more reassured (or maybe I just care a bit less), undertainties still remain. In addition, my readings have been interdisciplinary, partly as I had no other choice, partly because historians need to look beyond their own discipline. One evening in Brazil, during a dinner with other conference participants, we were talking about the next conferences we were going to attend. When I was asked, I had no clue – I did not have any plans. I explained that I was having difficulties finding suitable events for my research. One peer replied something that stuck in my mind: sometimes, we need to be creative and adapt our paper to the topic of a conference. He was right, but until I would discover an event where I could, even creatively, adapt and present my research, time would pass.

In early 2019, I thought that cultural history was maybe the way to go. Hence, I was looking for a cultural history conference and found one in Tallinn in June 2019, organised by the International Society for Cultural History. The overall theme of the event was global cultural history. I remembered the advice of the colleague in Brazil and thought that I could give it a try. I submitted a paper entitled “A small country in a global context: the case of Luxembourg’s cultural policy”. It was accepted. In hindsight, I think that my abstract could have been better, especially as I included too many details which created certain constraints. Preparing my actual presentation of 20 minutes, I became aware that I had to be quite superficial to discuss everything I promised in my abstract.

At the same time, though, I gained a better idea of cultural history and how it developed as an ‘opponent’ of social history. It appears that the opposition between social and cultural history is less strict nowadays and historians would not police the disciplinary boundaries. Indeed, during the roundtable discussion, a participant suggested that we should integrate other tools and approaches, and not exclude something because we think it is not ‘good’ history. In my opinion, this is what historians should do anyway, when useful and leading to new insights and viewpoints. 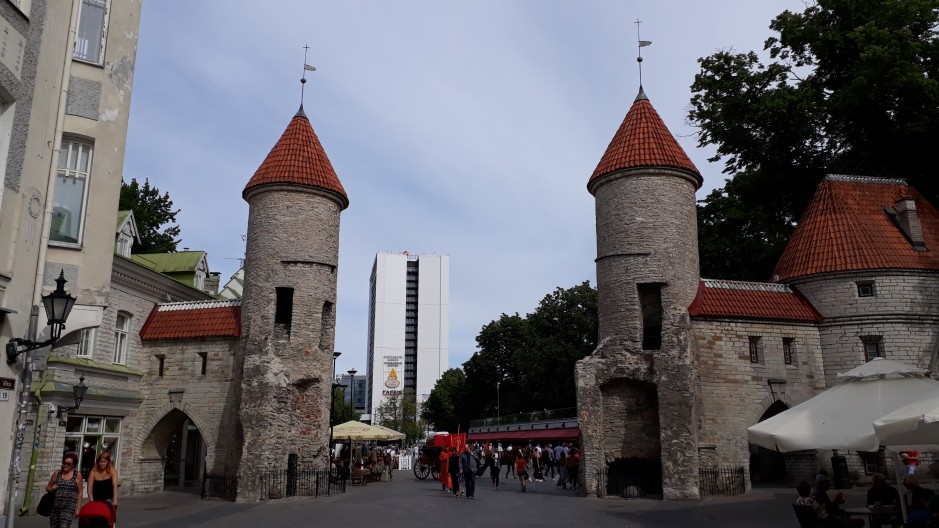 Tallinn, between medieval heritage (Viru Gate) and modern architecture (hotel in the background). The focus on the medieval aspect for touristic purposes cannot be overseen. At the same time, outside of the old city centre, new buildings have been erected alongside those witnessing the Soviet past.

Of course, many other issues and aspects were discussed at the conference. As the overarching theme was global cultural history, the concept of ‘global’ and the field of ‘global history’ were also debated, particularly during the roundtable discussion. I am still not sure how it should be defined and whether any definition exists - I would need to do some further reading to find out. The label can also change: at the University of Cambridge, as I was explained, historians prefer using ‘world history’, as ‘global’ is considered to designate a process. When the roundtable discussion turned to the question of global history, some participants agreed that global history was actually used to overcome the difference between social and cultural history.

Besides global history, and maybe not surprisingly, transnational history was discussed, too. In this context, I do not agree with the criticism of ‘transnational’ during a keynote by Prof. Matthias Middell (University of Leipzig). Of course, transnational history bears the risk of focusing on national borders and nation states, despite being mere constructions and appearing only more recently in human history. However this should not hinder us from using ‘transnational’ as a concept, as long as we are aware of potential risks and clearly voice them. I had the impression that Middell’s criticism aimed to promote the concept of ‘transregional’ he developed together with other researchers. While it might be better adapted to  a history which is not focusing on the period from 19th century onwards, simply replacing ‘nation’ with ‘region’ does not solve some key problems, especially the constructive character. The concept of region needs to be historicised and a region can change in scope. During his lecture, Middell said that “transnational history is global history for the poor”. Unfortunately, I do not remember whether he quoted someone else or it was his genuine claim. Yet, can both fields (or approaches) be compared? How would they be defined in relation to each other? Is global history for the rich, then, who have the necessary economic and cultural capital for research in different places and understanding different cultures and languages?

One topic that I missed at the conference was public history, or at least reflections on how to share cultural history with non-historians. How to share or do history with people who belong to the cultures that are analysed? And where can public history be fruitful? After all, cultural history is not only limited to contemporary history, which would allow collecting interviews (oral history), for instance, but potentially covers the entire human history.

Disciplines, fields and concepts more often than not elude clear definitions and do not have fixed boundaries. When I was writing my abstract, I was not consciously thinking about ‘meaning’, ‘symbols’ or even ‘agency’. I was simply trying to offer a perspective that fitted within the general topic of the conference, to improve the chances of acceptance, of course, but also to take a different perspective on my own research. It might be a proof that theoretical debates about the essence of a field are less important in practice. Yet, it also makes me wonder whether cultural history is really a field, or rather a set of versatile and flexible approaches and tools. I cannot provide an answer and it is not my place to do so. The large variety of topics at the conference, from Renaissance Jesuits over TV commercials in communist countries to archaeology in Finland, should at least provoke reflections.

Toppling Symbols: Statues, the Colonial Past and the Public Space

The actions against statues of historic figures involved in colonialism and its derivatives highlight the importance of critically confronting our past and rethinking our public space.
News