On creating a research poster for an academic conference

Cover of the brochure of the historical pageant on 22 April 1939.

Historians like to write, and they write a lot. Throughout my studies in history, I was taught how to analyse sources and how to write a scientific work. But I have never been taught how to present my research in a poster format – which requires a minimum amount of creativity.

The International Public History conference in São Paulo, Brazil (21 to 24 August 2018) gave me the opportunity to present, for the first time in my life, a research poster.1 A year ago, I did not even know that something like poster sessions at conferences exists and I had no clue how a research poster should look like. I talked to some colleagues and searched for examples on the internet. I needed to answer two basic questions: who should the poster (theoretically) address and what subject would I like to present? For the first question, my answer was clear: of course, there would be academics at the conference, but considering that it was in a Public History context, I imagined a broader public, who should be able to understand my poster with a minimum of information. For the second question, I decided after some reflections that I would choose a subject from my own research on cultural policy history and connect it to public history. I wanted to use the Centenary of Independence in Luxembourg in 1939 as an example not only of cultural policy, but also of public history.

In 1939, Luxembourg, a small country between Belgium, France and Germany, commemorated the year 1839, interpreted as the year Luxembourg acquired its independence. The date was a deliberate choice, especially as the development of an autonomous state was a process which did not happen from one day to the next – other dates of the 19th century were important for Luxembourg as well (such as 1815, when Luxembourg became a Grand-Duchy). Furthermore, the Centenary took place in a context of international tensions, mixed with fears of an outbreak of war and of German annexationism. The government clearly wanted to show, especially to its neighbours, that it was a legitimately independent nation-state. A national commission was instituted to coordinate and organise the celebration. It created several sub-committees dedicated to specific tasks. At least 60 people were involved in these committees: politicians, engineers, journalists, teachers, etc. One of them was the historian, teacher and museum curator Joseph Meyers (1900-1964).

The celebration disseminated the master narrative which was very influential at the time. For some, 1839 merely marked the resurgence of independence, after centuries of “foreign dominations” preceded by the medieval period during which, as the master narrative goes, Luxembourg was “autonomous”. Joseph Meyers was a member of the committee for the historical pageant, organized as part of the official programme of the main celebration in the capital on 22 and 23 April 1939. Meyers published a textbook in 1939 on the history of Luxembourg, reusing elements of the master narrative. His exact influence on the pageant cannot be determined in hindsight with the sources at hand, but it is clear that the discussions were also influenced by the master narrative. The Centenary celebration was certainly an example of a “pre-history of public history” (Chris Hilliard), and Joseph Meyers himself filled the role of a public historian, at a time when public history did not exist as a concept. 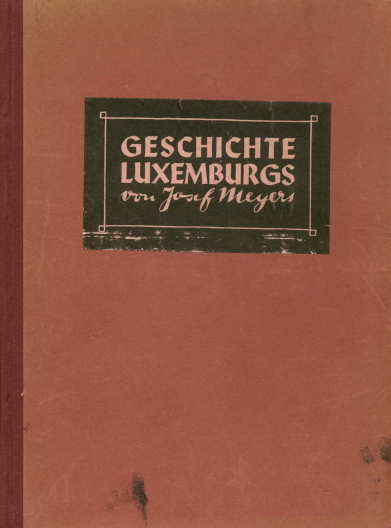 Cover of the book "Geschichte Luxemburgs" by Joseph Meyers (1939).

Once I could answer the two basic questions, the next challenge to tackle was the conceptual one. I am far from being a graphic designer. I had to think about what information to show, what images to include, what icons and symbols to use, what colours to choose. I needed to be more creative than usual. I started drawing some concept works: how should the poster be organised? After some (bad) drawings and further reflections, it became clear to me that the poster should be divided into three columns, each equivalating to a thematic sub-section: an introduction (left column), the 1939 celebration and the people participating in it (middle part), and the instruments used (media, historical procession, etc.) (right column). In hindsight, I’m not sure if the public would even read the poster in the way it is intended (or more precisely I intended as an author): starting with the left column, and for each column from top to bottom. I used arrows and other visual cues to guide the reader. But then again, the spectator should be free to choose how to read. 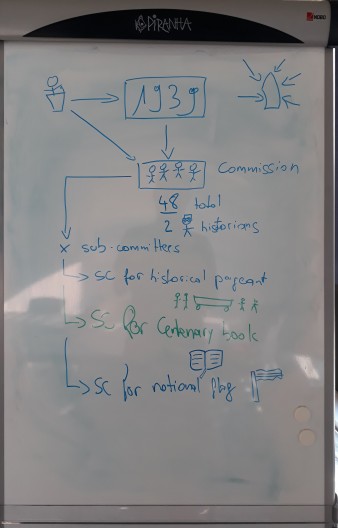 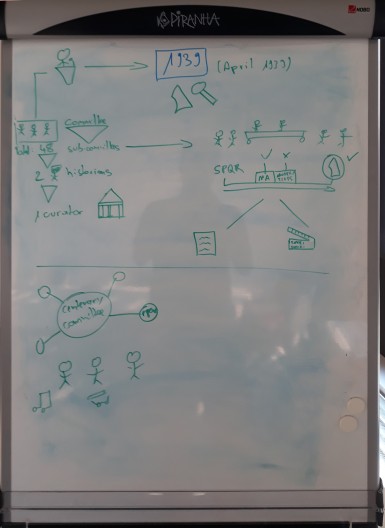 The development stage of the idea partly overlapped with the layout phase of the poster on the computer – it was a trial and error approach. And I needed to visualise the handwritten ideas in order to see whether it made sense or not. I chose Adobe Photoshop as software, not necessarily because I saw great advantages to other software (I wouldn't even know how to compare), but because I had some very basic knowledge and could handle the most common tools in Photoshop that I have taught myself over the years. Indeed, the layout of the poster was mostly limited to creating text boxes, adding images, and arranging the items in the desired way. I reworked my poster several times, also thanks to the input from two colleagues.1 I removed some text and added a very short presentation of Luxembourg at the top of the first column – my potential public would not necessarily know where Luxembourg is.

Between submitting the final version to the organizers and actually presenting the poster at the conference, some weeks passed. Weeks during which I did further research on the event and discovered new archival material. I then realized that the poster had a small mistake, which I could not correct anymore. It said that 48 people were involved in the commissions, but in the end, with the new sources, the number was at least 60. This small experience also showed me once again that we can never be sure if the sources we use are complete. Many might have been lost over the years, others might be discovered only later, pushing us to review previous research and correct it when necessary. 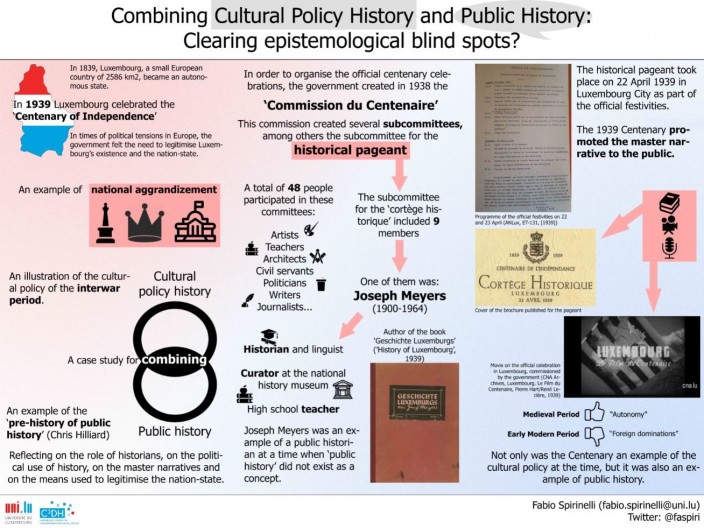 The final version of the poster.

The creation and presentation of the poster was an insightful experience for me - and I had fun doing it! The poster session allowed me to discuss with people a topic that, abroad, is absolutely not known. One recurring question concerned the reception of the event – how did the public perceive it? And what did newspapers say about it? Indeed, I did not think about that – which is quite ironic, considering that I was thinking about “my” public when creating my poster, but not about the public’s perception of the Centenary and the pageant during my research.

With the example of the Centenary Celebration, I wanted to highlight the connection between public history and cultural policy. It illustrated how history could be used for political and national purposes, in an era of nation-building. Indeed, the government did not only organise a historical pageant, a brochure on the pageant was published, too, creating a continuity from Antiquity to the most recent events. The government also commissioned the production of a movie, Le Film du Centenaire, depicting scenes of the main celebration (including the pageant) and destined to be projected not only in cinemas in Luxembourg, but also abroad.

The Centenary celebrated the idea of the nation and aimed at legitimising Luxembourg’s independence. But only a year later, in May 1940, Luxembourg was invaded by Nazi Germany - and the idea of an independent nation was turned into its opposite.

There is not much literature about the Centenary Celebration of 1939. Some information can be found in Inventing Luxembourg by Pit Péporté et al. (2010). Also, historian Claude Wey analysed the Centenary in a paper, Le Centenaire de l'Indépendance et sa commémoration en 1939, published in the Hémecht (n° 1, vol. 41) in 1989.

When academics or developers create a website or an application, they usually start from the back end and only then focus on the design or front end. In this blogpost I would like to argue that the design process and user analysis specifically should come first. The methods outlined below were discussed during the workshop on the introduction to user experience design and evaluation methods by dr. Carine Lallemand and dr. Vincent Koenig.