The Werner Report, 50 Years On
MENU
Contemporary history of Europe

The Werner Report, 50 Years On

To mark the 50th anniversary of the Werner Report, the C²DH and its partners are organising a series of events from 6 to 9 October 2020. At a time of uncertainty as to the wider European project, the role of Economic and Monetary Union (EMU) will be analysed via an interdisciplinary approach based on archive research and existing literature.

On 8 October 1970 in Luxembourg, Pierre Werner officially presented the plan by stages for an economic and monetary union (EMU) in the European Community. This document was the result of seven months of discussions by a group of experts from the six Member States, chaired by the Luxembourg Prime Minister and Finance Minister. The Werner Report set out the broad lines, principles and stages of an EMU based on the principle of irreversibility and an approach rooted in perfect symmetry between the economic and monetary aspects, with political union as the ultimate objective. It provided for the creation of a “centre of decision for economic policy” that would be “politically responsible to a European Parliament” elected by universal suffrage, and a “Community system for the central banks”. It introduced the notion of strong macroeconomic governance, requiring the coordination of budgetary and monetary policies, and full financial integration. It also envisaged the involvement of the “social partners” (employers and unions) in defining economic and monetary policy, since the social dimension was seen as an intrinsic part of EMU.

Although it was ultimately not implemented, the Werner Report led to the creation of the European Monetary Cooperation Fund (EMCF) in 1973 in Luxembourg – the embryo of the future European Central Bank. This institutional architecture was inspired by the reflections on a European reserve fund initiated in 1948 by Robert Triffin and subsequently developed through his discussions with Jean Monnet and Pierre Werner. The three were committed to the European cause and shared the same vision of EMU, rooted in “perfect parallelism”, democratic strength and a social dimension. Robert Triffin and Jean Monnet, together with other members of Monnet’s Action Committee for a United States of Europe, intended to work on the strategy devised by Pierre Werner to build a political consensus around the report.

Despite the fact that the Werner Report was effectively shelved in 1974 as a result of the collapse of the Bretton Woods system and the energy crisis, it largely inspired the Delors Report (1989) and the 1992 Maastricht Treaty. The creation of the European Central Bank on 1 June 1998 and the introduction of the euro on 1 January 1999 marked the establishment of EMU, although the asymmetry between the monetary and economic dimensions was a source of intrinsic weaknesses. But despite these structural defects, compounded by subsequent political and democratic upheavals and the global financial crisis, EMU has proven resilient, and the euro has maintained its credibility, attractiveness and international role.

As we mark the 50th anniversary of the Werner Report, it is well worth analysing the role of EMU at a time of uncertainty as to the wider European project, via an interdisciplinary approach that draws on historical and archive research and takes into consideration the theoretical debates in the literature and the various methodological challenges. We will begin by looking at the modernity of the Werner Report, which proved to be a blueprint for EMU; several of its recommendations are still on the agenda today. Through the collaboration between Robert Triffin, Jean Monnet and Pierre Werner as reflected in the archives, we will highlight the key role of various figures, networks and institutions in monetary unification and in shaping EMU. We will then take a closer look at how EMU created the monetary, financial and fiscal stability that Europe needed to overcome periods of difficulty such as the global financial crisis and its repercussions. Finally, we will explore the multifaceted future challenges facing EMU: what steps still need to be taken to complete the project? How can we strengthen the international role of the euro and bolster Europe’s economic and financial autonomy? How can we best tackle technological developments in the field of money and finance? And how the COVID-19 crisis is testing the boundaries of the European integration? 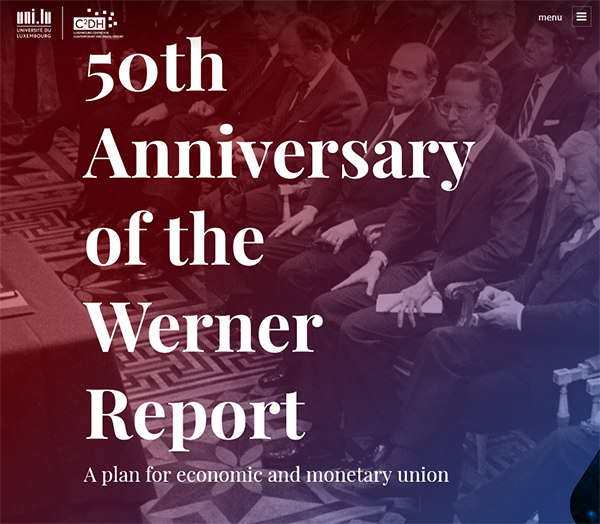 Inauguration on 6 October (by invitation only) in the presence of

Open to the public from

7 - 31 October on the ground floor of the Maison du Savoir, University of Luxembourg, Belval Campus

Bridge Forum Dialogue Video-conference: “The Economic and Monetary Union by Stages". Anniversaries of the Werner Report and the Euro Rescue Funds

under the chairmanship of Werner Hoyer, President of the European Investment Bank.

Introduction by Pierre Gramegna, Minister of Finance of the Grand Duchy of Luxembourg.

Conclusion by Stéphane Pallage, Professor, Rector of the University of Luxembourg

Registration required before 1 October via the website of the Bridge Forum Dialogue.

EMU in Uncertain Times: Learning from the Past to Navigate the Future

and also via livestream

Chamber of Commerce , Luxembourg and via livestream

Lecture by Niels Thygesen (Emeritus Professor University of Copenhagen, President of the European Fiscal Board) followed by a round table with the participation of Luc Frieden (Minister of Finance of Luxembourg (1998-2013), Chairman of the Luxembourg Chamber of Commerce), André Sapir (Professor, Senior Research Fellow, Bruegel) and Niels Thygesen.

Prior registration is mandatory. Seats are limited.

The event can also be followed online (via Webex).

Research Seminar: The future of money in the digital age (Blockchain and cryptocurrencies. Digital currencies vs sovereign currencies: potential implications for EMU)

A dynamic economic and monetary union

The ADEMU 2020 workshop will be part of Luxembourg’s celebrations of the 50th anniversary of the Werner Report and the 10th/8th anniversary of the EFSF/ESM. The workshop, originally planned to take place within the Barcelona GSE Summer Forum 2020, is sponsored by the Pierre Werner Chair of the European University Institute, the European Stability Mechanism and the University of Luxembourg.

Luxembourg Centre for Contemporary and Digital History (C²DH)/University of Luxembourg, in cooperation with EUI Florence (The Pierre Werner Chair Programme on Monetary Union), Robert Triffin International (RTI) and the Jean Monnet Foundation for Europe (FJME), and with the support of the Robert Schuman Initiative for European Affairs (RSI), the Europe Direct Information Centre at the University of Luxembourg (EDIC), the Banque centrale du Luxembourg (BCL), the European Investment Bank (EIB), the European Stability Mechanism (ESM), the Historical Archives of the European Union (HAEU), the Bridge Forum Dialogue (BFD), the Pierre Werner Family Archives, the Fondation du Mérite Européen (FME), and the Chamber of Commerce, Luxembourg (CdC).