New Extractivism captures the contemporary forms of exploitation related to connectivity and networked infrastructures. It consists of a map and a manual followed by footnotes that depict and describe different concepts and allegories linking old to new forms of colonialism. The ideas, things and people presented together on the map and the manual are approached as an assemblage that express what extractivism today is and depends upon; they refer to the mining of data but also of natural resources, and to the labour of human but also of nonhuman agents, highlighting their interconnection. The work pays special attention to earth labour and geological processes that power the engines of new extactivism, and also presents the impact of the continuous data accumulation on the body of the planet. It discusses how the furthest corners of the biosphere are affected while new data economies are being born maximizing profit for a few. 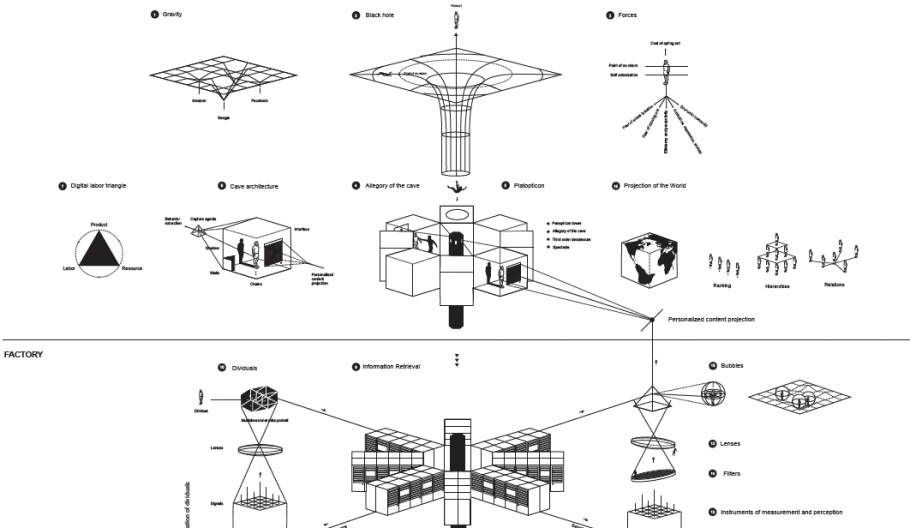 He explores and visualises different technical and social aspects of algorithmic transparency, digital labour exploitation, invisible infrastructures, and many other contemporary phenomena in the intersection between technology and society.

In 2018, in cooperation with Kate Crawford, he published Anatomy of an AI System, a large-scale map and long-form essay investigating the human labour, data, and planetary resources required to build and operate an Amazon Echo. His previous investigation Facebook Algorithmic Factory, included deep forensic investigations and visual mapping of the algorithmic processes and forms of exploitation behind the largest social network. Other investigations, he authored, published in recent years by the independent research collective, SHARE Lab included research on information warfare, metadata analysis, browsing history exploitation, surveillance, and internet architecture. He curated and organised numerous events and gatherings of internet activists, artists, and investigators including SHARE events in Belgrade and Beirut. His artistic pre-history is rooted in media activism and game hacking.

Vladan Joler’s work is included in the permanent collections of the Museum of Modern Art (MoMA) in New York City, the Victoria and Albert Museum in London and included in the permanent exhibition of Ars Electronica Center. His work is exhibited in more than a hundred international exhibitions, including institutions and events such as: ZKM, XXII Triennale di Milano, HKW, Vienna Biennale, V&A, Transmediale, Ars Electronica, Biennale WRO, Design Society Shenzhen, Hyundai Motorstudio Beijing, MONA, Glassroom, La Gaite Lyrique and institutions such as Council of Europe in Strasbourg and European Parliament in Brussels.

He has received numerous awards, including the 2019 Design of the Year award by the Design Museum in London and S+T+ARTS Prize ’19 Honorary mention by the European Commission and Ars Electronica.

Aside from his permanent professorship position at the Academy of Arts in Novi Sad where he teaches at the New Media department, he has given lectures at numerous educational and art institutions including University of Oxford, Museo Reina Sofía, CCCB, Royal Academy of Arts in Copenhagen, HfG-Karlsruhe, MG+MSUM, Aarhus University, Somerset House, Hangar Barcelona, Mucem Marseilles and numerous events such as Re:Publica, Transmediale, Ars Electronica, The Influencers, CCC, etc.

Joler’s work has been profiled and covered in many international media such as BBC, CNN, WIRED, The Independent, The Times, Wallpaper*, Le Figaro, The Verge, Fast Company, +ARCH, ArtForum, Neural, LesJours, WeMakeMoneyNotArt and many others.

If you want to participate, please send an e-mail to vanessa.napolitano@ext.uni.lu to receive the link.