Google Maps as a tool for researchers? The example of the debates on the national museum in Luxembourg
MENU
Luxemburgische Zeitgeschichte Digitale Geschichte und Historiographie

Google Maps as a tool for researchers? The example of the debates on the national museum in Luxembourg

Some time ago, I was wondering whether I could use Google Maps as a tool for my research on the history of the National History and Art Museum in Luxembourg, to adopt a distant reading approach, with the aim to gain new insights. I did it and, in the following blog post, I look back at this small experience.

The Musée national d’histoire et d’art (MNHA) in Luxembourg City has a long history. Before 1988, it was part of what was known at the time as Musées de l’Etat, which included, besides the MNHA, the Musée d’histoire naturelle. The adjective ‘national’ was only added in 1988, in a law that separated both museums de jure (the physical separation would eventually happen in the 1990s).

The first ideas of a ‘national museum’ for Luxembourg date back to the 19th century, initially promoted by erudite societies, such as the Société pour la recherche et la conservation des monuments historiques dans le Grand-Duché de Luxembourg, founded in 1845. From the 1870s onwards, in the era of nation-building, the state was increasingly interested in creating a national museum. Yet, it was a lengthy process. Between 1878 and 1893, three commissions were created, tasked with examining the possible creation of a museum. The third commission, the “commission chargée d’examiner la question de la construction d’un Musée national” (ministerial decree of January 1893), was composed of six members, all of them either engineers or architects. It was the only commission to produce more tangible results. Today, its reports provide an insight into the discussions on the potential sites for the future museum, besides letters documenting some exchanges between the government and the city council.

When reading through the sources, I became aware that I might need a mapping tool allowing a distant reading of all the locations that came up. Something similar was already done by the researcher Isabelle Yegles-Becker, who did use an old, undated map of Luxembourg as a background on which she indicated the locations.1 I preferred to not simply reuse this map, but to create my own and look at the sources myself, especially as I did not know on what sources Yegles-Becker relied for creating her map (I suppose at least partly the same, though). As the national museum should be constructed in the capital, it was quite evident that these locations were all within the city. I decided to use Google Maps, wanting to know whether I could use it for more than merely looking up addresses and getting directions. I also hoped to learn something new.2 It was the first time that I discovered new options in Google Maps. I created a new map with a shareable link; it can be accessed here.3

For each marker, I could add comments, pictures and videos - even if adding pictures, in the case of multipage documents, is fastidious, as only one picture at a time can be uploaded. Different layers can be created and activated or deactivated. In my case, I chose to distinguish between “mentioned or envisaged locations” (including rejected suggestions), and “locations with more detailed plans” (which only applies to two sites). Google Maps does not allow to visualize changes over time, as opposed to other tools such as Palladio or Nodegoat. In my case, it would not be too problematic, as most of the sources used dated from the second half of the 1890s. Only in one case, the St Esprit plateau, the first mention appeared in 1877, even if the site was discussed by the commission in 1898. 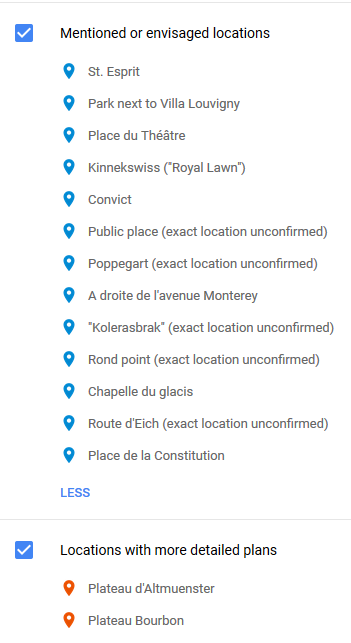 The two layers I created for my map - with the potential sites mentioned in the sources.

Another issue concerned the uncertainty of having complete sources. The archives do not necessarily contain, for instance, all the reports of the commission (and who says that reports were even produced for every meeting? What about discussions outside of the commission?). Thus, some locations debated at the time might be missing and the list is not necessarily exhaustive. Moreover, in some cases it remains unknown who suggested a specific site, and whether external people could send in suggestions or exerted some influence. The commission’s reports show that its members were looking for a place close to the centre, easily accessible (especially for tourists) and enabling the construction of a monumental building.

In five cases, I needed to do some guesswork, by placing the markers on an approximate location. Only a further analysis of new sources, such as land registers or city plans, might help completing the information and improving the map. For instance, on 9 March 1989, the commission discussed a “new public space to be created near the Werling, Lambert and Thorn properties between the avenue Monterey and avenue d[e] l’Arsenal – rue Joseph II” (“nouvelle place publique à créer près des propriétés Werling, Lambert et Thorn entre les avenues Monterey et d. l'Arsenal - rue Joseph II”). I do not know yet where the mentioned properties were located exactly. Furthermore, street names change over time. An “avenue de l’Arsenal” does not exist anymore (as far as I know, it is today the Emile Reuter avenue). At first, I thought that the public space could be the Winston Churchill Square (which, according to that hypothesis, would have existed at that time under another name). However, the report might as well mean the park between the Joseph II boulevard, Emile Reuter avenue, Monterey avenue and Prince Henri boulevard.

The use of Google Maps taught me once again that not everything we read in sources is obvious to us today. It turned out that the history of the museum was even much more related to the urban history than I thought. But did I gain new insights? To some extent yes. In fact, most of the sites that were mentioned in the sources are in the periphery of the historic city centre. There is one simple reason: the centre of Luxembourg city was already densely built. There was no place for the construction of a ‘monumental’ building. In addition, as the map shows, many potential sites were located in the area of the municipal park on the western flank of the town centre, stretching from the avenue Marie-Thérèse in the south to the avenue de la Porte-Neuve and the Pescatore Foundation in the north. Indeed, the whole area was heavily fortified before 1867. The Treaty of London of 1867 introduced a neutrality status for Luxembourg. It required the dismantlement of the fortifications. The Prussian garrison in Luxembourg City, until then a fortress of the German Confederation, had to leave.

From the 1880s onwards, the area of today’s municipal park was progressively urbanized.1 Thus, it is not surprising that the commission and public authorities were considering many sites in that area for a future national museum. However, in 1899, the Bourbon plateau, though it was even criticized by the members of the commission in April 1898, was chosen as the site for the future museum. An architect from Vienna, Carl Seidl, won an international competition launched by the government in 1899 and received the approval of the commission. In the end, Seidl’s project on the Bourbon plateau was never realized. Another site, the Altmünster plateau, criticized by the commission for being unsuitable, would be chosen in 1919 in a national competition initiated by the government. Again, the projects submitted never went beyond their conceptual phase. In 1922, the Collart-de Scherff house on the Marché-aux-Poissons in the town centre was bought by the government and chosen as the future building for the national museum. The Musées de l’Etat, as it came to be known, was provisionally opened in 1939.

Looking back at my experience with Google Maps, visualizing the information by putting the locations on a map helped me to gain new insights. It also pushed me to look much closer at the information that was provided by the reports. I discovered that I had problems to precisely locate all the sites and was clearly confronted with some knowledge gaps concerning the urban history of Luxembourg (which was, again, a reminder of humbleness). The map I created is still not complete and it will remain uncertain whether it includes all the locations discussed at the time. We need to accept these uncertainties, but also to explicitly voice them.

My use of Google Maps helped me to take a different perspective on the sources. At the same time, I had to switch between distant and close reading, never cutting the links with my sources. This is extremely important, as simply looking at the map will not reveal the uncertainties and the sources it is based on. The possibility of adding comments (in my case I added quotations from the sources related to the specific locations) and pictures (photos of the sources) helps to move beyond a mere collection of markers. The use of such a mapping tool eventually helped me to ask new questions that I would not have thought of before. The history of the museum was connected to the urban development of Luxembourg and even to the national and international context (Treaty of London and the removal of the fortifications). There is still much to be researched, and I hope that one day I will get rid of at least some of the uncertainties.

The map I created is far from being perfect and complete. I haven’t uploaded all the sources yet, and the pictures are not high-quality scans. They are photos I took myself, at a time when I was not even thinking of using them for a map. As the map is linked to my personal Google account, the question of sustainability is a further issue: if I delete my account, the map and the uploaded pictures will be gone, too. Despite these issues, I was able to change my perspective and gain new insights thanks to a distant reading approach. The possibilities offered by a mapping tool such as Google Maps allow me as a researcher to connect the map and the information it contains directly to the sources I use, by uploading pictures or videos. Maybe it could also be used in class, for pedagogical purposes, for working with students on similar corpuses, for reflecting critical on sources and tools. I think there is much potential, even if some limits can be quite challenging. The lack of a timeline does not enable a coherent narrative if a longer period is covered or if the path and experiences of a migrant, for instance, should be reconstructed. There might also exist better alternatives, open access and not developed by private companies, and I warmly invite the reader to share ideas and suggestions of other, similar tools.