CfP: Borders In Flux and Border Temporalities In and Beyond Europe
MENU
Europäische Zeitgeschichte

Conference organised by the C²DH and the Transfrontier Euro-Institut Network (TEIN) on 15-16 December 2022 in Belval. Deadline for submission: 1 September.

Border studies is an interdisciplinary field of research in which existing scholarship has primarily been spatially oriented. The conference Borders In Flux and Border Temporalities In and Beyond Europe organised by the Luxembourg Centre for Contemporary and Digital History (C²DH) and the Transfrontier Euro-Institut Network (TEIN) aims to shed light on research that focuses on the spatial as well as on the temporal dimension of borders, borderlands, and border regions. The conference seeks to connect leading researchers as well as established and early-stage researchers to present, share and discuss their research on borders, borderlands, and border regions in and beyond 19th and 20th century Europe.

The aim is to invite scholars whose research sheds light on the spatial and/or temporal dimension of borders by exploring border practices, border discourses, and analyses of border regimes and life at the border in Europe. We look for papers that focus on topics that are related, but not limited, to identity, historical memory, minorities, cross-border experiences, cross-border cooperation, and regionalism. With this conference, we also look forward to methodological and conceptual considerations of researching borders in and through time and space.

We invite proposals from various disciplines including history, political sciences, anthropology, sociology, geography, etc. The conference provides the option for early-stage researchers/doctoral researchers to present their work in the format of a poster during a Research Walk.

Applications should be sent by 1 September 2022, and should include an abstract of no more than 300 words and a brief biographical note of the author(s). Submissions will be reviewed by a scientific committee and decisions will be communicated by 31 October 2022.

Selected papers will be published in a peer-reviewed publication. The language of the conference and the publication is English.

Submissions and questions should be directed to borderconference2022@gmail.com.

MEMBERS OF THE SCIENTIFIC COMMITTEE 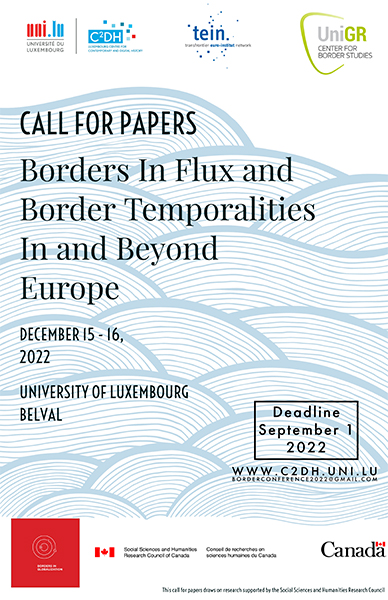 On 24-25 March, the C²DH welcomed archivists and digital humanists to discuss collections informing the history of cross-border cooperation in the Greater Region.
Thinkering

Report of the WARLUX workshop from 14 October 2021.