Together with students, the WARLUX team researches the personal side of the history of Luxembourgers, born between 1920 and 1927, who were enrolled into German services during the Second World War. To uncover the individual experiences of these men, women and families, the team of WARLUX collects ego documents and personal interviews of this generation. As one of the last surviving witnesses, Madame Jacoby-Sheehan welcomed Dr Nina Janz and Cristina Sobral to talk about her war experience.

Cristina Sobral is a student (B.A. Cultures Européennes) at the University of Luxembourg. During her summer semester she conducted research for Dr. Janz’ class (“Biographies of Luxembourgish conscripts in WWII”) about Madame Jacoby-Sheehan and her life during the war.

Georgette Jacoby, born on 28 July 1922, was living in Luxembourg City during the occupation and was of Luxembourgish and Italian nationality.

On 10 May 1940, Georgette witnessed the German invasion and spotted a field kitchen and horses stationed in the park near her home at Boulevard du Prince. As a feeling of fear struck her, she called after her father. She stood shortly before her 18th birthday. German officials occupied many local residencies and evicted the inhabitants. Georgette’s father renounced the offer of moving into a property that had been stolen from Jews, and moved into a run-down apartment in Luxembourg Grund, next to a Nazi neighbour. Many families from the community were forced to give up their private vehicles. Georgette’s father drove his three-month-old Crysler to Charlesville and handed it over to the Nazis. The men from the community also participated in the Luftschutzdienst in their neighbourhood, as did her father.

When she returned to school, Georgette refused to join the Bund deutscher Mädchen (BdM), resulting in her expulsion.The German invasion brought many changes for young Georgette: She lost her well-beloved environment and had to move, her education suffered, and her father struggled to enter a well-paid job since he vehemently refused to join the Volksdeutsche Bewegung (VDB) and was consequently discriminated against. 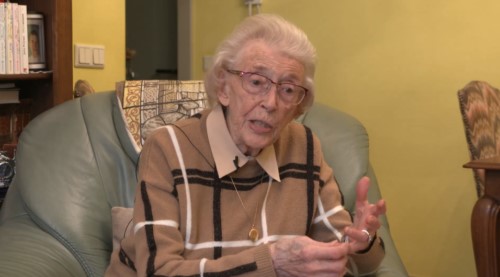 In March 1942 Georgette received the order to present herself for her Reichsarbeitsdienst. With the help of her father, she evaded recruitment for two days before being forcefully removed from her home by two officers.

She was stationed in Lindlar near Cologne. A bombing alarm caused her train to arrive late at night. Georgette’s tardiness was commented harshly upon by her supervisor. The ill-equipped camp did not have proper lighting and no cooling space for foods and meats. Although she hypothesised about deserting, her fear about the consequences for her father kept her in place.

In the camp she was forced to adhere to the Nazi ideology and was punished with most difficult or uncomfortable tasks. Georgette got in trouble regularly, especially for associating with the French war prisoners. Shortly after her arrival, she was immediately reprimanded for speaking French and to them, which made her a future target for her Leiterin. She kept in contact with the men and regularly exchanged cigarettes for chocolates with them. Every punishment was met by one of her provocative and challenging answers. But certain aspects were consoling: Luckily, she shared a room with five fellow Luxembourgish women, that she had known from her childhood. Those friendships made it possible for her to endure the rigid discipline and otherwise lonely conditions. Georgette stayed with farmer families that she described as kind and even got to listen to the then forbidden English BBC broadcast once with one of them. 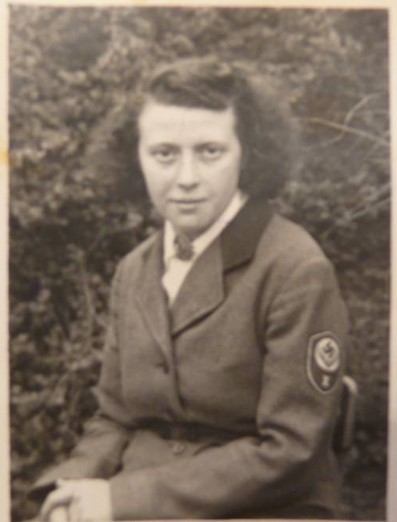 Most of her duties consisted in helping those families with their daily work. She assisted them by milking the cows, which she was rarely successful with, and cleaning the stalls, a preferred activity, or even with simple household duties. She also helped with the collection of the potato harvest, where she used the opportunity to exchange goods with the French prisoners. One moment of excitement occurred during her camp time, when she and the other girls were awakened in the middle of the night by their supervisors to listen to a radio broadcast about the Americans landing in Europe and the ensuing fight. This moment awakened joy and hope in Georgette.

Georgette had also been supposed to give her oath on Hitler in Lindlar. Her stubborn refusal landed her in prison for six weeks, during which she was forbidden to send letters to her only correspondent, her father. Knowing her father would have stormed the camp to rescue his daughter, her roommates and friends wrote to him on her behalf and lied about her being hospitalised due to a cold and an injury. Father and daughter corresponded regularly, and Georgette’s father sent her many packages with perishables such as cakes, breads or even cigarettes that she ended up exchanging with the French prisoners. After Georgette’s return on the 3rd of November 1941, her father, fearing for her safety, managed to find her a job at SIEMENS so that she could evade enrolment into the Kriegshilfsdienst.

The day of the liberation, 10 September 1944, Georgette started a new job as a prison guard in the female’s prison. She remembered having heard many people in town celebrate the liberation. She had witnessed the Americans fighting German soldiers and observed their escape. Having kept her off-the-grid and self-assured personality, she explained not holding any grudges against Germans, even years later.

Around that time, she met her future husband, Georges Sheehan, in her uncle’s hotel Italia that she would marry in 1954. After her vows, the couple remained in Bonnevoie with Georgette’s father and had one daughter. Although she remembered her war experience as an emotional ordeal, she is of the opinion that many suffered far worse. She also believed God to have kept her safe.

Georgette Jacoby Sheehan, and many other Luxembourgish women, suffered an attempt of indoctrination under the Nazi regime. She was exploited on a camp during her Reichsarbeitsdienst and verbally abused for her defiance towards an oppressing and violating government. Still, she managed to take back control over her life and used work as a means of escaping more Nazi-related organisations. The day of the liberation marked itself into her brain, and to she has kept vivid memories of it to this day. Today, Georgette lives in Echternach.

Cristina’s personal impression: “Meeting and interviewing Georgette Jacoby was a delight for me. Since Georgette Jacoby’s life is rich of history, her willingness to share her impressions and experiences regarding the Second World War is a much-needed approach for research. Her kind- and open-hearted, yet witty, personality made for an impressive interviewee.

As a future historian, the opportunity of conversation with an individual whose memories are indispensable to research excites. This experience is enriching to both research and historical passion: Every individual partakes in shaping the past and historical events, so historical research should be available to all of us. I thank Madame Jacoby for her time and interest in furthering our project.”. 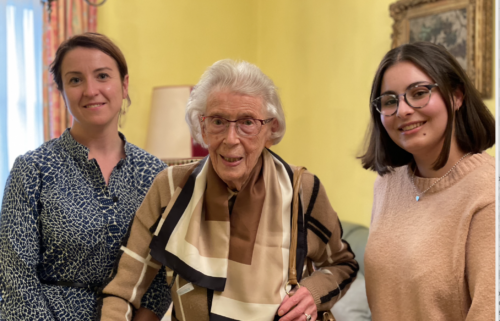 Contemporary history of Luxembourg Memory studies Oral history WW2 Teaching and learning WARLUX - Soldiers and their communities in WWII: The impact and legacy of war experiences in Luxembourg

Impressions of building a community around people working on the digitization of historical ‘egodocuments’ using Transkribus.
News

CfP: The impact of war experiences in Europe – The conscription of non-German men and women into the Wehrmacht and Reichsarbeitsdienst (1938-1945)

In connection with the WARLUX research project, this conference focuses on the impact of war experiences on non-German nationals serving in the Nazi German armed forces and labour organisations. It will be held on 26-28 October 2022 at the University of Luxembourg.