The exhibition « Légionnaires » is the outcome of a collaboration between the C²DH and the Musée Dräi Eechelen, bringing together the results of a quinquennial investigation on the Luxembourgers in the French Foreign Legion.

The exhibition « Légionnaires » is the outcome of a collaboration between the C²DH and the Musée Dräi Eechelen, bringing together the results of a quinquennial investigation on the Luxembourgers in the French Foreign Legion conducted at the University of Luxembourg as well as the work of local specialists, public historians, and international experts.

The exhibition represents also the last phase of Éischte Weltkrich, a digital public history project on the experience of WW1 in Luxembourg.

The French Foreign Legion has been historically accompanied by ambivalent connotations: an elite corps founded within the frame of the French colonial expansion, laced with romantic exoticism and contradictions, populated by soldiers regarded as both intrepid heroes and marauders on the run in search for redemption.

In the specific context of Luxembourg, the legionnaires experienced a wave of popularity after the First World War, when, in a fragile political climate, the contribution of the Luxembourgish expatriates in the Allied armies was glorified and used to dispel criticism and prove Luxembourg’s participation in the war effort.

The involvement of the Luxembourgers in the French Foreign Legion, however, dates back well before WW1, when economic migrants in France, as well as deserters and the working-class youths of the border areas, would choose the mercenary career in the colonies as a way of making a living, escaping conviction and seeking adventure. This engagement in 1903 was described by Prime Minister Eyschen, as a “circonstance deplorable”, and several documents attest direct interventions of the government to bring back home teenage Luxembourgers who had enlisted against the will of their parents.

A significant change occurred at the beginning of WW1, when, amidst the general mobilisation, a decree allowed foreigners in France to join the war as volunteers in the Foreign Legion, while those already engaged in the African colonies were deployed to the Western Front.

Groups of expatriates motivated by patriotic intent or compelled by social pressure, as well as workers facing unemployment and poverty rushed to enlist.

In Paris, the circles of Luxembourgish intellectuals, outraged by the German occupation of the Grand-Duchy, actively lobbied for the participation of their fellow expatriate compatriots. Similarly, in Luxembourg charitable associations were created in support of the families of the Luxembourgish legionnaires.

During WW1, such an influx of allegedly patriotic fighters in parts changed the shady reputation and social composition of the Foreign Legion increasing its popularity and heroic portrayal. The “Régiment de marche de la Légion étrangère” (or RMLE), resulting from the fusion of various units of the Foreign Legion, distinguished itself at the Somme, Verdun, in the Second Battle of the Marne and other theatres of war.

Sometime after the Armistice, on 16 March 1919, the Luxembourgish legionnaires made their triumphant entrance in Luxembourg City amidst parades, concerts, and celebrations.

The enthusiasm for the legionnaires however was not univocal and the manner they were greeted reflects the political tensions of those days. A few months earlier, a group of socialist and liberal deputies had attempted to proclaim a republic and the controversial Grand Duchess Marie-Adélaïde had eventually abdicated in favour of her sister Charlotte.

As a matter of fact, the organisation of the event was for the most part an initiative of private individuals and associations close to the Francophile and republican circles. Similarly, the associations in support of the legionnaires and their families, as well as those fundraising for the erection of memorials, were created and subsidised mostly by civic groups and volunteers.

Despite these initial controversies, the tales of resistance, heroism and sacrifice of the Luxembourgish legionnaires gradually came to dominate the narratives about WW1 in the Grand Duchy, and the Monument du Souvenir, locally known as Gëlle Fra, erected to commemorate the engages volontaires, would later become one of the most iconic national symbols.

The unproblematic and romanticised portrayal of the Luxembourgish legionnaires as patriots, heroes and victims that has pervaded the national master narrative failed to reflect the complexity of their experience, their diverse social and cultural backgrounds, their motivations and opacities.

In order to incorporate the most recent scholarship on the topic, the purpose of this project is to highlight such complexities moving the emphasis away from the war to focus on the social and cultural context. The military engagement in the Foreign Legion emerges as the result of historical, social and economic conditions, colonial expansion, conflicts and migratory fluxes. The intersecting histories of the Legion and of the Luxembourgish emigration in the 19th and early 20th century, alongside issues of nationality and identity, constitute a central aspect. Another focus is on the shifting representations and self-representations of the legionnaires in official statements, press and popular culture.

Covering a timeline spanning from the early-19th century to the interwar period, with a particular focus on WW1, the exhibition is articulated around five main themes that explore the role of the Luxembourgish expatriates in the French Foreign Legion, their social and cultural milieu, the migratory patterns that lead to their engagement, the war experience and its aftermath, and the ambiguities of their representation and self-representation.

A focus on micro-histories allows to gain an insight into personal experiences against the broader historical socio-political context.

Who were the Luxembourgish legionnaires? What were they doing in France? Why did they decide to enrol? How were they portrayed and remembered?

Striving to provide a memorable, enriching and engaging experience, the exhibition development – in close collaboration with architects, music composers, designers, and multimedia artists – creates an immersive and interactive environment.

Thanks to the synergistic work of 2Farchitettura and Tokonoma, the curatorial concept is translated into a circular and jagged physical space where technology, soundscape, visual elements, and spatial orientation complement and reinforce the exhibition themes and content.

The path of the visitor through the exhibition narrative and object displays is accompanied by large video installations as well as smaller video projections displayed on narrow transparent windows. Integrating an original soundtrack, the voices of the legionnaires, recreated from the original documents, are broadcast through old gramophone horns.

The exhibition is accompanied by a location-based interactive game that engages the players in a digital treasure hunt around Luxembourg City. The game, developed by the VR/AR Lab of the University of Luxembourg in collaboration with the C²DH, extends the exhibition outside the museum walls, allowing players to see the cityscape in a different light and discover the history of the légionnaires in the places that marked their passage.

It will be available from 30 June 2021 by visiting www.legionnaires.lu 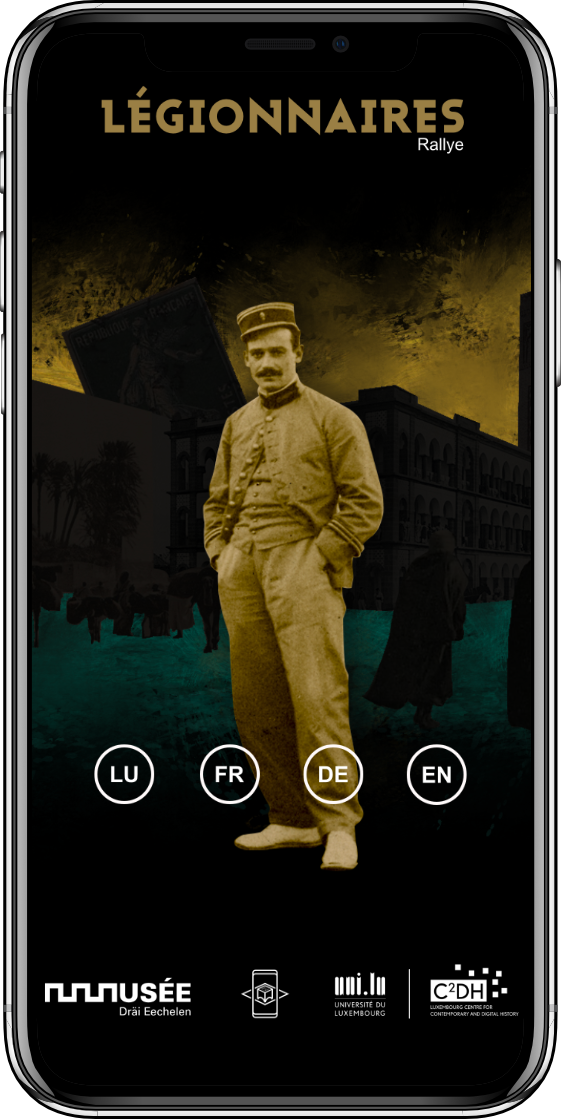 A comprehensive online digital platform displaying the data collected on the Luxembourgish legionnaires and realised by the C²DH is currently in phase of development and will tentatively be released in the last quarter of 2021.

The exhibition is open to the public

Sandra Camarda
Sandra is an Assistant professor
More about this author →