There is more than just one East Berlin. People made very different experiences with the capital of the GDR. Hence there are also plenty of different memories of the East German capital. An exhibition on the history of East Berlin has to take these different perspectives into account and should be based on shared authority.

Such an approach is what we tried to apply at our exhibition “Ost-Berlin. Die halbe Hauptstadt” (East Berlin. Half a Capital) that was curated by the Leibniz-Centre for Contemporary History Potsdam (ZZF) in cooperation with the City Museum of Berlin. It was shown from May to November 2019 at the Ephraim Palais in Berlin and attracted more than 62.000 visitors. Our goal was to show the interplay of dictatorial rule and everyday life in the capital of the GDR during the 1970s and 1980s. We tried to reflect on the different experiences that people from the East and from the West made in East Berlin. But we also wanted to start an intergenerational dialogue by including the perspectives of a younger generation that was born after the fall of the Berlin Wall.

In order to present these different perspectives, we sought to build the exhibition on shared authority based on broad participation. This participation, however, was not only to be achieved during the display of the exhibition. It was not to be limited to hands-on presentations for the visitors. Instead, we aimed for a participation in advance by the cooperation of different people during the process of the curation of our exhibition. This concept was developed by students of the Public History Master program, which the Freie Universität Berlin offers since 2008 in cooperation with the ZZF in order to reflect on history in the public and to present history for the public. The students created a number of participatory ideas for the exhibition that we carried out together. 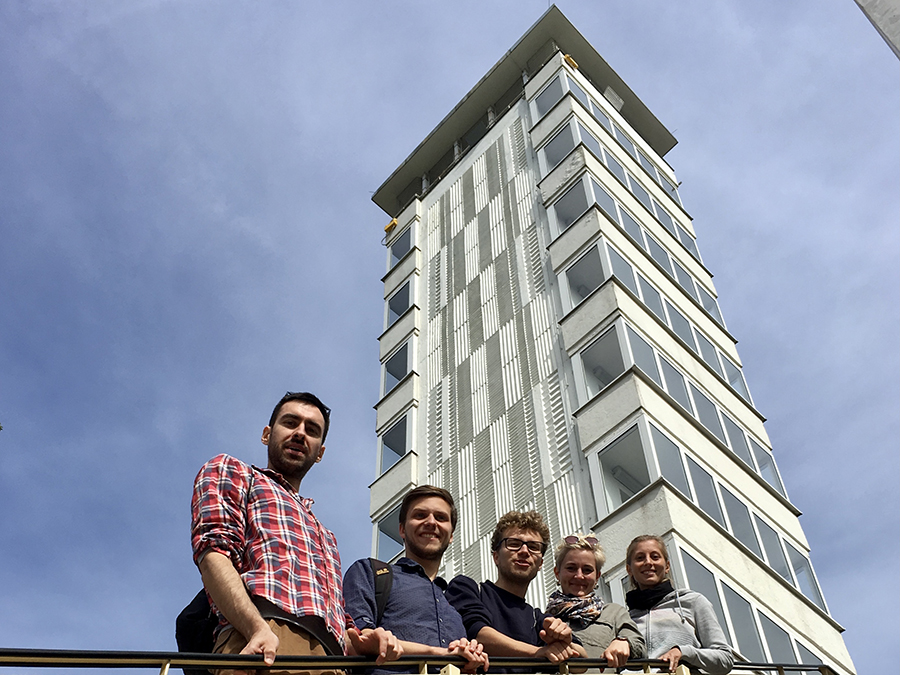 On the website www.ost.berlin that accompanied the exhibition the students operated a blog that was called: OstBlogBerlin. It contained almost 100 blog entries on East Berlin that were written and edited by the Public History students, but also entailed contributions by other people who participated in the exhibition. This included a number of high school students. Some of them developed geocaching tours with the app Actionbound through East Berlin. Students from another high school in the eastern district of Prenzlauer Berg spread out and conducted some field research on the history of a major road close to their school. Led by one of the Public History students, they came up with all kind of stories about shops, bars, clubs and factories on Greifswalder Straße. One student even dressed his friend with fashion from East Berlin and took pictures of her at the middle of the road. Other classmates interviewed their parents and grandparents to retrieve stories from the past. Moreover, the high school students took actual photographs from the street and filmed it from the back window of a tram in order to compare it with a similar film that was taken from a tram on Greifswalder Straße in 1990.

The visual representation and memory of East Berlin played a key role in the exhibition. We published a call for photographs on the website in order to collect either historical private pictures from East Berlin or modern photographs that show remnants of it in the present. We asked the people to upload their pictures together with the geographic coordinates of its photo motif and with a personal story about the background of the photograph. The contributors thereby enriched the photo collection of the City Museum. Likewise, we designated a room in the exhibition for personal objects that was called “Mein Ost-Berlin” (My East Berlin). Here we displayed all kinds of objects and their related stories from “ordinary” East Berliners, but also from the regional museums in the twelve districts of Berlin which cooperated with the City Museum. Initially, we had planned to leave one cabinet empty in order to invite visitors to contribute their objects during the display of the exhibition, but it turned out to be too complicated to curate this in a proper way, so we decided to collect all objects and stories in advance and to change the displayed objects every three weeks. The room “Mein Ost-Berlin” turned out to be one of the most popular rooms in the entire exhibition that consisted of 20 rooms and contained about 1000 objects.

It would not have been possible to find and to display all these objects without the vast collection of the City Museum and the expertise of its employees. Since the majority of the employees originates from East Berlin, this exhibition was something very personal to many of them. In the curation process of the exhibition, we had lots of engaged and productive debates on the character of East Berlin and the East German dictatorship that led to multi-nuanced presentations in the exhibition, as different team members were responsible for different rooms. Moreover, we used one of the museum’s plenary sessions to ask each employee to write down three terms that he or she associates with East Berlin. The result of this collection was printed on the steps of the stairways that led to the three floors of the exhibition. 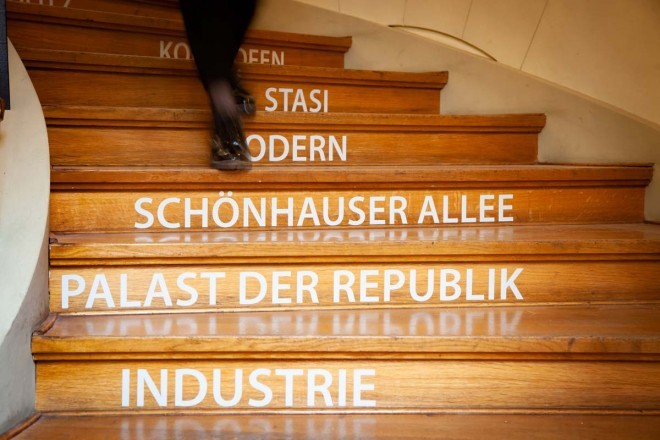 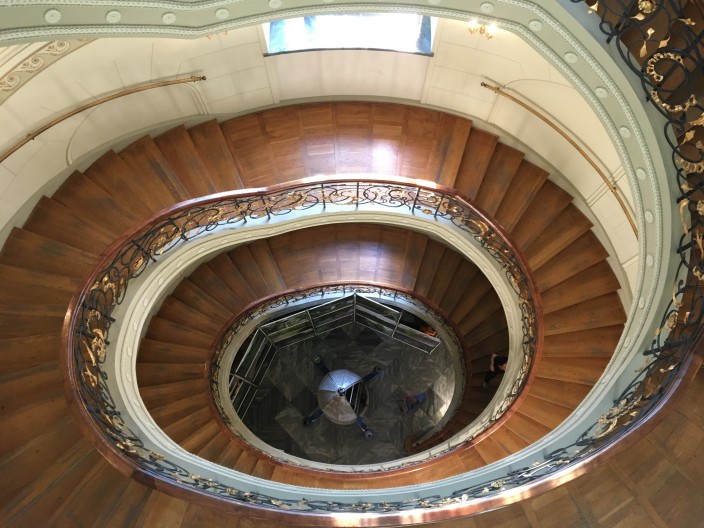 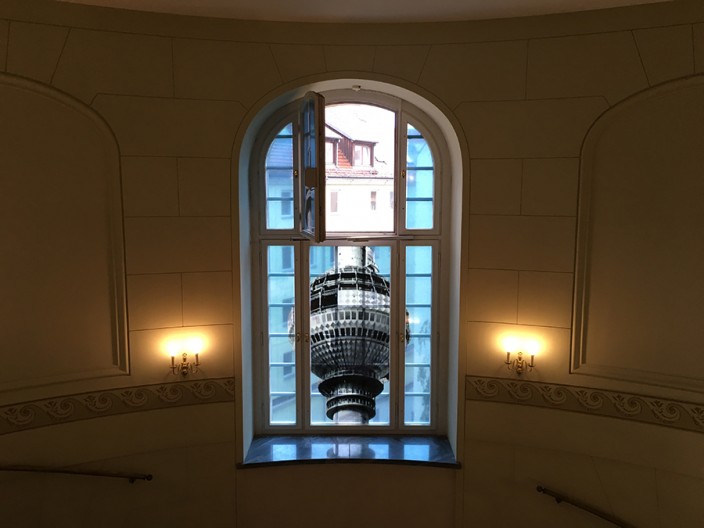 Another way of enriching the expertise to curate the exhibition was to invite people from other museums, historians and journalists to participate in an advisory board. Eventually all of these experts were asked to publish their own perspectives on East Berlin. Their individual essays were collected in a volume called “Ost-Berlin. 30 Erkundungen”, that was edited by the main curator of the exhibition Jürgen Danyel. Additionally, we asked journalism students from the Universität der Künste Berlin (UdK) to create a journal to accompany the exhibition. This magazine was handed over to all visitors of the exhibition. It contained articles on several topics that were not mentioned in the actual exhibition. By focusing on topics like the queer East Berlin the magazine had a complementary character and widened the perspectives of the overall exhibition project.

Most of the participation at the exhibition took place in advance. However, we also wanted to broaden the participation in the actual exhibition during its display. This did not only include the visitors of the exhibition, who could operate an old ticket machine, wear an original Eastern sports jacket and leave their answers to the question, what was their symbol of East Berlin and how its remnants should be treated. We also sought to include people, who have normally no voice in the museum, even though they are always present in the exhibition. Hence, we asked the guards from the supervisory staff to become hosts at the exhibition. Instead of saying “Don’t touch it”, they now had the chance to share their experiences and memories of East Berlin with the visitors. Most of the guards have an East German background and were very happy about their new role.

The success of the exhibition on East Berlin was partially due to its timing. Simultaneously to its display that ended on the 30th anniversary of the fall of the Berlin Wall, there was a new interest in the legacies of the East and in the problems of the long process of German reunification. East and West still matter a lot in the German capital. And it is still a question, where you come from. When I gave tours through the exhibition, I often noticed how skeptical the visitors looked at me at the beginning. The majority of them came from East Berlin and apparently thought that I might be a young West German who is now going to explain them their life. But as soon as I identified myself as somebody who had grown up in East Berlin, they started to smile and to listen. My authority as curator was hence often not so much based on my academic expertise as a trained historian but on my own origin. 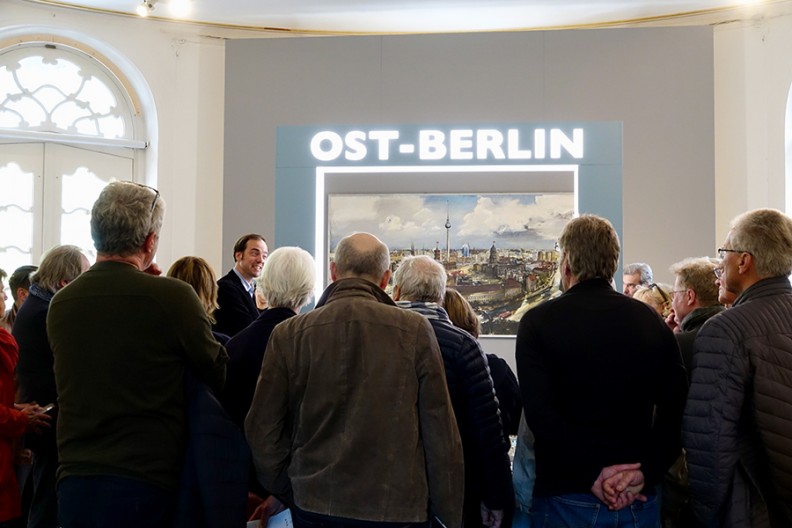 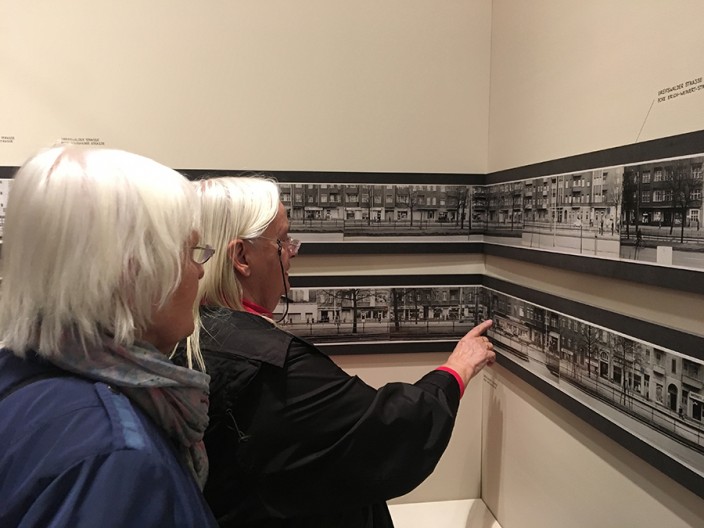 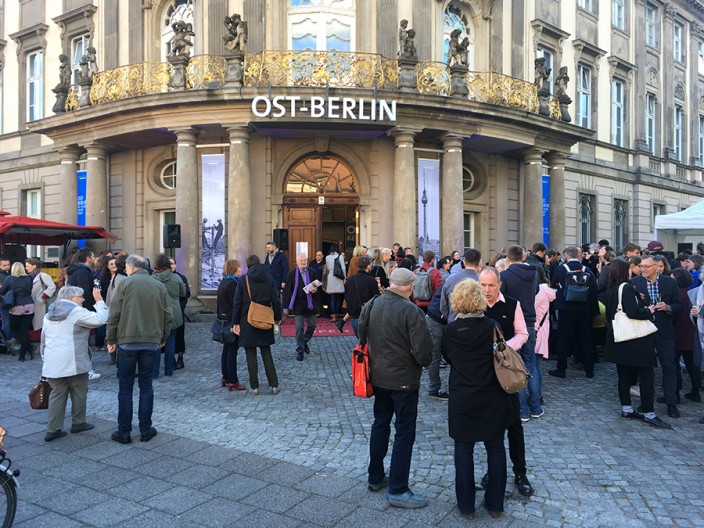 Many visitors seemed to be very satisfied with the exhibition. The concept of participation in advance allowed us to present many different perspectives on East Berlin that many visitors could connect with. To be sure, there were also very critical remarks that one could read in the visitors’ books. Some argued that the exhibition would not talk enough about the repression in the communist East, whereas others complained that East Berlin was depicted far too grey. The overall majority of the entries in the visitors’ books, however, praised the exhibition for its nuanced approach. The visitors apparently felt represented by this exhibition and expressed their content with comments like this:

Finally, someone has told me my own life in a proper way!

The author of this article Hanno Hochmuth was one of the curators of the exhibition “Ost-Berlin. Die halbe Hauptstadt”. He is Research Fellow at the Leibniz-Centre for Contemporary History Potsdam (ZZF) and was Postdoctoral Researcher at the C²DH in February and March 2021. The text is based on a presentation at a workshop of the REMIX-Team on March 16, 2021.

Together with students, the WARLUX team researches the personal side of the history of Luxembourgers, born between 1920 and 1927, who were enrolled into German services during the Second World War. To uncover the individual experiences of these men, women and families, the team of WARLUX collects ego documents and personal interviews of this generation. As one of the last surviving witnesses, Madame Jacoby-Sheehan welcomed Dr Nina Janz and Cristina Sobral to talk about her war experience.