My earlier work with Belgian, British, and German databases of digitized newspapers, which I used for my dissertation ‘Public Politics: The coming of age of the media politician in a transnational communicative space, 1880s-1910s’, sparked my interest in digital humanities. As the C²DH is rapidly becoming the epicentre of digital history in Europe, I wanted to come here myself to try some ‘thinkering’ – playing around with digital tools to answer historical questions.

While I met a host of researchers, I worked in particular with Estelle Bunout and Marten Düring of the project ‘Impresso: Media monitoring of the past’, as well as Lars Wieneke, Gerben Zaagsma, and Maria Biryukov. I used the Impresso database of digitized newspapers to test the idea that, over time, there has been a ‘privatization of politics’, in which political reporting has increasingly focussed on the private lives of politicians rather than on political ‘content’. Research to investigate this notion has been hampered by the need for a large volume of media sources – unavailable until the recent mass digitization of newspapers - and the impossibility of manually analyzing such a large volume of sources. However, by applying topic modelling to large corpora of digitized newspaper articles on a selection of political figures, I tried to detect any increase in the number of topics dealing with ‘private’ matters (e.g. family, personal appearance, lifestyle, upbringing, religion). More specifically, I compared the alleged privatization of prime ministers and monarchs in different European countries over the past two centuries. On a meta level, I used this privatization idea to reflect on the pitfalls, opportunities, and next steps in the methodological use of digitized newspapers.

Besides the research, the Fellowship enabled me to see what a future history faculty may look like. In my experience, history and computer science always remained separated fields, but at the C²DH historians and computational linguists collaborate effectively to switch back and forth between the distant and close reading of historical texts. Finally, the sense of approaching the past through the future was reinforced by the physical setting: the hypermodern Belval university campus is located on an old industrial site, and I could process my new digital experiences during walks through the traditional Luxembourgish countryside. 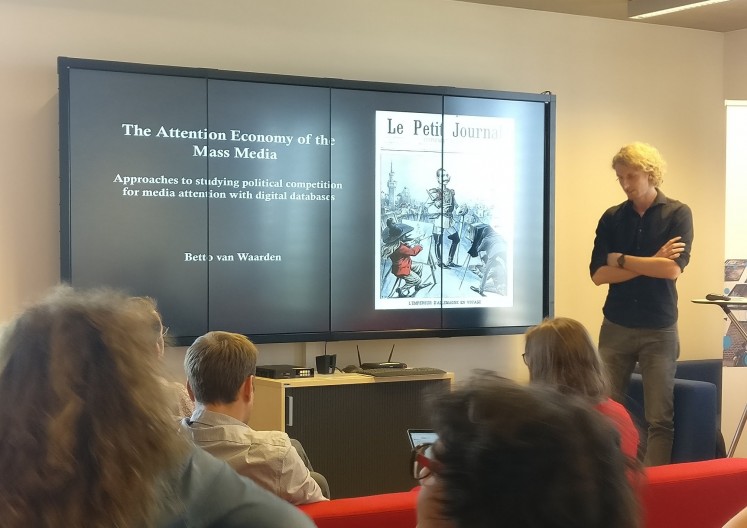 What better place to share the opportunities inherent in the digitisation of newspapers collections than an online event?
Thinkering

A guide to using collections of digitised newspapers as historical sources

The impresso team has prepared a guide for scholars on using collections of digitised newspapers as historical sources, published on the PARTHENOS platform.