The newly started research project BUREU has the purpose to develop a transnational and multidisciplinary framework for the analysis of EU administrative buildings.

Research on the European Union is rife with metaphors referring to the history of European integration as a process of ‘building’. These metaphors appear in various guises. First of all, there is a visual component. Surely enough, most books from the field of EU studies have highly generic front covers, whose nondescript designs often seem to mimic the blunt impersonality that is often associated with EU institutions. Yet, some publishers did make an effort to create more imaginative layouts – for instance through the usage of ‘constructional’ visual metaphors. The cover of The Palgrave Handbook of the European Administrative System for instance depicts a generic stock image of scaffolding, while Kaiser’s, Leucht’s and Rasmussen’s History of the European Union shows the European Commission’s Berlaymont Building (Brussels) under construction in 1964. Other book covers have been illustrated with photos of completed EU edifices – most importantly the Berlaymont Building again, but also the Parliament (Brussels) and the Court of Justice (Luxembourg). 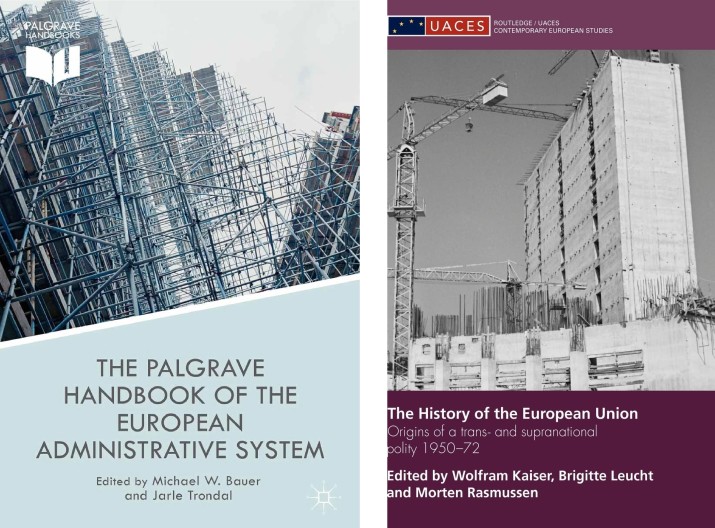 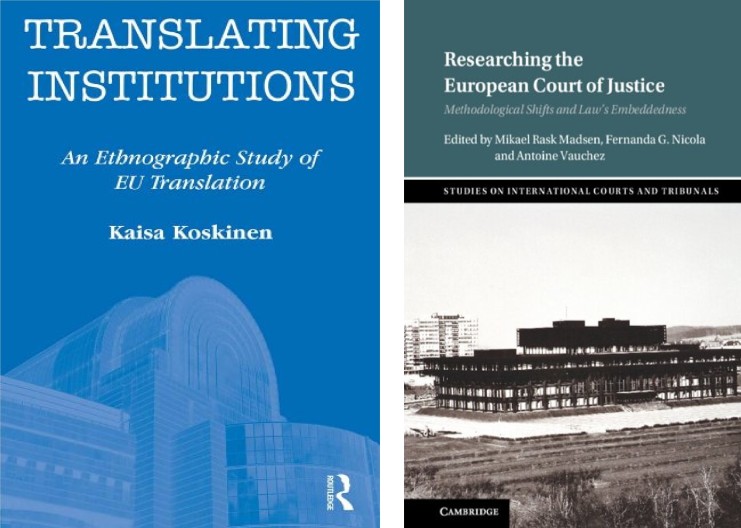 Constructional metaphors have also been used to describe and explain the organisational, legal and procedural aspects of the EU’s complex administrative framework. The most telling examples are probably Cris Shore’s ethnographic study on EU institutions and Wilfried Loth’s general history of European unification: both books are simply entitled Building Europe. More elaborate metaphors have been conceived by the philosopher Luuk van Middelaar and the historian Kiran Klaus Patel. The former has likened the EU to a ‘baroque church’ with older ‘gothic and romance’ elements, resulting in a mixture of ‘styles’. For Van Middelaar, these ‘stylistic’ dimensions represent three distinct (and sometimes mutually incompatible) theoretical views on the purpose and functioning of the EU: federalism (which advocates a strong parliamentary power base), confederalism (which sees an important role for the government leaders of the member states), and functionalism (which proposes a technocratic, largely depoliticized union). In a similar vein, Patel has observed that ‘to this day, the architecture of European integration bears little resemblance to the objective rationality of Bauhaus’. Instead, ‘it is an edifice that reflects its history […], with some windows bricked up and new ones broken through elsewhere, with extensions and conversions, ruins and follies’. This image reflects Patel’s argument that the history of European integration should not be approached teleologically, since there was no grand and harmonious master plan by which the process was guided from the onset.

The abundance of constructional and architectural metaphors contrasts sharply with the absence of architecture in the literal sense in almost all studies on the EU’s functioning. Revealing, in this respect, is a remark by the political scientists Antonis A. Ellinas and Ezra Suleiman, who noted that ‘although the many decisions taken daily in the Berlaymont and the other Commission buildings affect the lives of 500 million […] citizens, there are only a few systematic studies of [the] decision makers at the apex of the European administration’. Rightfully, this statement places emphasis on two elements: the huge societal importance the EU has achieved over the course of the last seven decades, and the somewhat elusive character of all large bureaucratic organisations, whose internal functioning often comes across as a ‘black box’ to outsiders. Equally rightfully, Ellinas and Suleiman pointed out that administrations are always physically and spatially ‘situated’ in office complexes, even though they did not elaborate on this matter any further. In this respect, their above-mentioned statement begs to be paraphrased: on the EU’s own administrative buildings, too, there are only a few studies, causing many questions to remain unanswered.

The newly started research project BUREU has the concrete purpose to develop a transnational and multidisciplinary framework for the analysis of EU administrative buildings. The research has a cultural historical thematic and methodological approach at its basis, and will draw additional approaches from the fields of architectural history, political science, and science and technology studies (STS). Focussing on the administrations of the Commission (the core executive body), the Council (the intergovernmental body), and the Court, we seek to open an architectural ‘black box’ and scrutinise how the organisation’s office buildings in Luxembourg and Brussels have shaped and influenced the EU’s functioning between the 1950s and the early 2000s. Through this focus on the spatial and embodied aspects of organisation, BUREU seeks to add to earlier research on EU architecture, which has mainly been concerned with architectural representation (i.e. the symbolism couched in the exterior of buildings) and urban planning. By ‘moving beyond the facades’, BUREU wants to deconstruct the tacit assumption present in the vast majority of EU research that office buildings are little more than ‘neutral shells’ for political and administrative activities.

Using archival and oral sources, BUREU will investigate the spatial consequences of science-based managerial theories (e.g. Scientific Management, egalitarian management) and architectural theories on administrative organisation. As has been noted by architectural historian Carola Hein, it is clear that architectural notions of ‘efficiency’ and ‘economy’ were of overriding importance in the development of the EU’s built patrimony, and this to the detriment of ideas on architectural representation. Yet, it is far from clear if – and how – efficiency was effectively generated in and by the EU’s office buildings. As such, BUREU will analyse how managerial and architectural theories on ‘rational’ office work functioned as normative models for EU office buildings, and how these theories affected the political and administrative activities performed therein. Which ideological elements (social, political, and gendered) underpinned these models? How were the models realised through design? Which expectations and tensions arose when they were put into practice? Did spatial regimes vary according to the respective EU entities (Commission, Council, Court), and if so, was there a perception that these variations affected the ‘administrative power’ or ‘governing capacity’?

In line with previous multidisciplinary historical research on the role of material and technological infrastructures in the creation of a European shared cultural space, BUREU thus has the overarching objective to contribute to the ‘integration of [European] integration [research]’: a field traditionally characterised by ‘a jungle of small specialities in different disciplines’ (as noted by Dimitris N. Chryssochoou). BUREU will not only add to earlier research on EU architecture, but also to the general understanding of the EU’s governance dimension, the nature of bureaucracy (whose abstraction and anonymity is counterbalanced by architectural materializations), and the character and impact of ‘background ideologies’ (a concept coined by Dirk van Laak) such as technocratic efficiency in post-war European history.

BUREU is a transnational project, funded by both the Luxembourg National Research Fund (FNR) and the Research Foundation – Flanders (FWO). Its researchers are based at the University of Luxembourg (C²DH) and the University of Leuven (Research Group Modernity and Society, 1800-2000). The multidisciplinary team will consist of two PhD students, one postdoctoral researcher (Dr. Jens van de Maele) and two principal investigators (Prof. Dr. Andreas Fickers and Prof. Dr. Martin Kohlrausch). Over the course of the following months and years, we will share some of our thoughts and preliminary research results via the C²DH website. You are warmly invited to follow us as our journey unfolds.

A. A. Ellinas and E. Suleiman, The European Commission and Bureaucratic Autonomy. Cambridge a.o., 2012.

C. Hein, The Capital of Europe: Architecture and Urban Planning for the European Union. Westport, 2004.