Archiving with the Apsáalooke

Hands on History talk with Rebecca S. Wingo, Director of Public History at the University of Cincinnati.

In 1922, the U.S. Office of Indian Affairs ordered a photographic survey of every reservation in the West. The federal government planned to pass a law making all Native Americans citizens of the United States. The surveys would measure individual family’s readiness for citizenship. Among the Apsáalooke (Crow Nation), the Indian Agent surveyed 244 houses. While these surveys and photographs are instruments of surveillance, they also provide a unique snapshot into Crow daily life. However, the descendants of the families haven’t seen these photographs before. It is relatively easy to create a digital archive to rematriate the surveys. But is it possible to do something more? Can we reframe these images wrought of settler violence as family portraits? 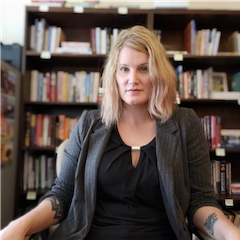 Rebecca S. Wingo is a scholar of the Indigenous and American West and the Director of Public History at the University of Cincinnati. Broadly (and rather eclectically), she studied houses: homesteads in the West, houses replacing tipis on the Crow Reservation in Montana, and the use of eminent domain to displace Black citizens for highway construction in the 1950s and 1960s. How we define house and home is a reflection of American architectural determinism — the belief that the structure of the house can shape the behaviors of the residents within, or that houses can be weaponized to destroy unwanted communities or cultures.

In addition to several articles and digital projects, she co-wrote an award-winning book, Homesteading the Plains: Towards a New History (University of Nebraska Press, 2017). She was also the lead editor of an open-access volume called Digital Community Engagement: Partnering Communities with the Academy (University of Cincinnati Press, 2020) that uses case studies to explore the ethical challenges of academic-community partnerships. DiCE won the 2021 Book Award from the National Council on Public History.

Her in-progress manuscript, Framed: Housing, Photography, and Adult Education on the Crow Reservation, uses historic photographs to argue that the Office of Indian Affairs designed their housing policy to restructure the relationships the Crows had to the house, to the land, and to each other.