Forum Z or the interaction of the C²DH with the public

The aim of the Forum Z (Z for Zeitgeschichte or contemporary history) series is to promote a critical, open debate on topical issues in contemporary Luxembourgish and European history.

The hundredth anniversary of women’s right to vote in Luxembourg was an anniversary not to be missed! While the National Museum of History and Art (MNHA) marked the anniversary with a major exhibition on universal suffrage, this Forum Z used it as a starting point for a broader reflection on what has changed for women over the past century. Was this political right the start of an emancipation for women in Luxembourg or simply the continuation of a movement that had begun before the First World War? What changed for women during the turbulent 20th century? What do today’s young people think about the questions of women’s rights, gender equality and parity? The experts present offered a critical perspective on the emancipation and representation of women in Luxembourg society, both in the past and today. 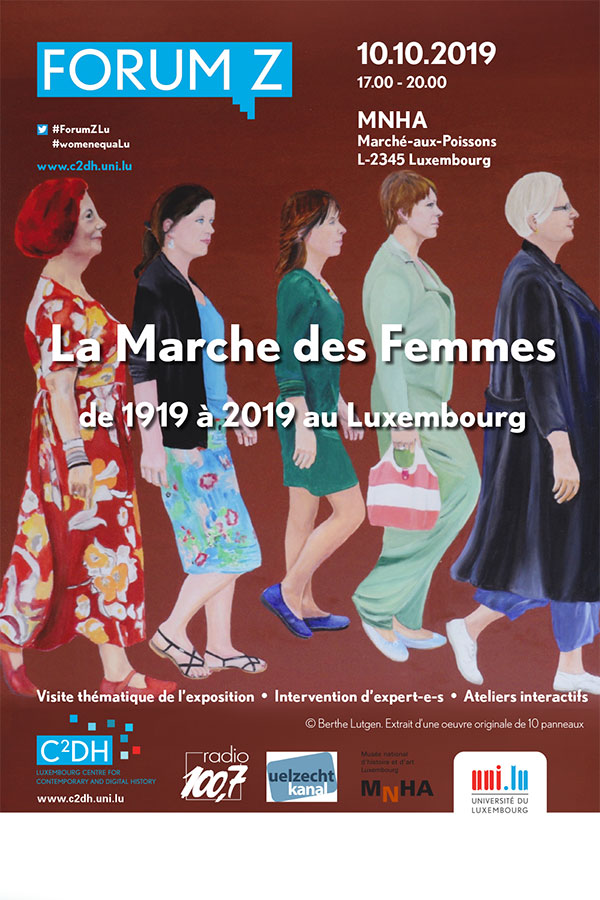 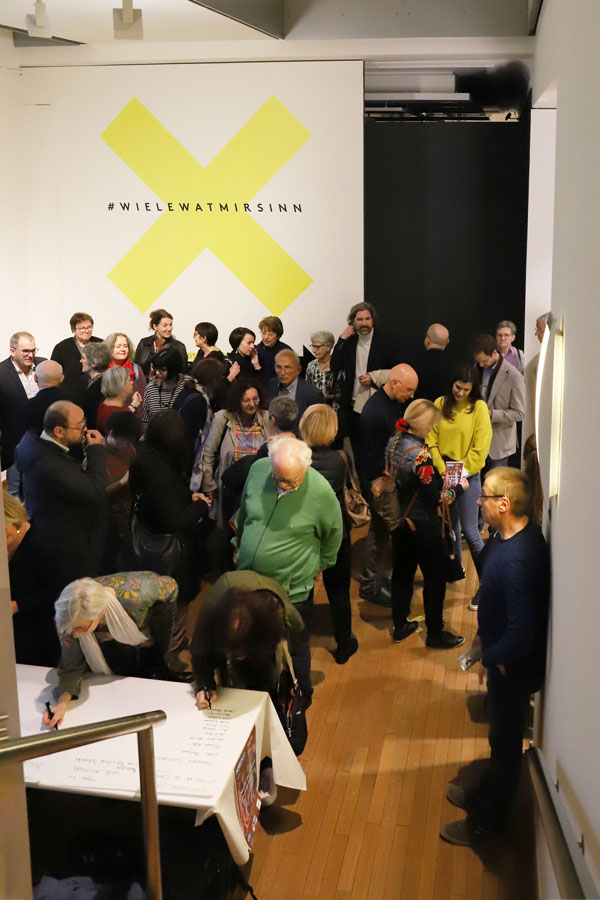 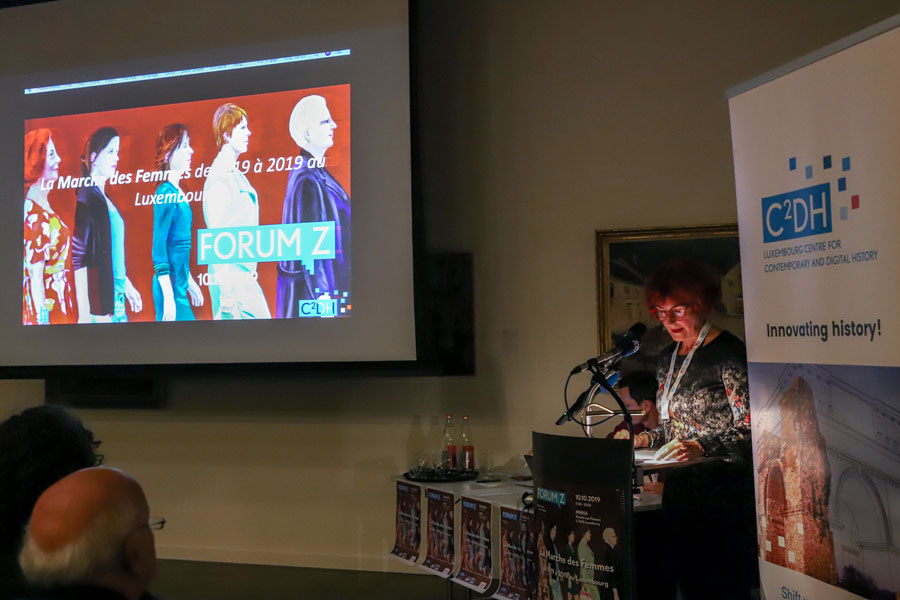 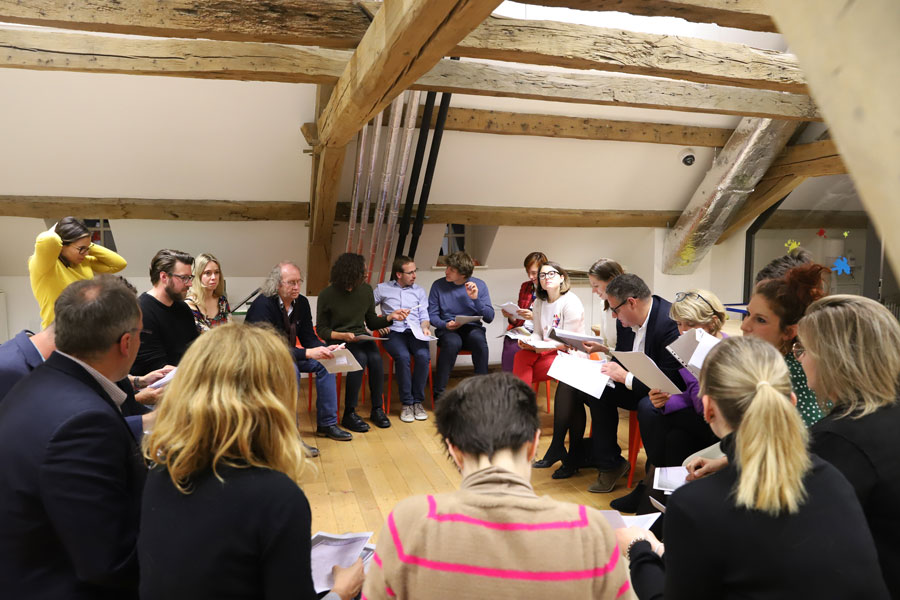 Jil and Ben, who are taking the Uelzechtkanal optional course at the Lycée de Garçons in Esch-sur-Alzette, commented on four filmed sketches of their daily lives. They initially did not apply the question to their own lives – “we don’t differentiate” – but as the process went on they became aware of several discriminatory aspects in their own experiences. They also filmed the Forum Z and conducted interviews.

What does the research say?

Well before the First World War, young women wanting to pursue higher education had to travel abroad, as Germaine Goetzinger explained, citing Marie Speyer and Anne Beffort, and despite the essential role played by Aline Mayrisch de Saint-Hubert in setting up the first two “Lycées de Jeunes Filles” in Luxembourg and Esch, it would take nearly 60 years for all the obstacles standing in the way of equality in education to fall.

Renée Wagener discussed the final stages in the process to secure the right of women to vote and stand for election, outlining the arguments for and against this political right that were put forward by male politicians during the debates in the Chamber of Deputies. She emphasised the concerted efforts of strong-minded women at this time, citing the written and spoken contributions of Marguerite Mongenast-Servais and Marguerite Hey. Marguerite Thomas-Clement, a member of the Socialist Party, was elected to Parliament on 26 October 1919 and continued to be re-elected until 1931. Régis Moes then took to the floor. He looked at the question of whether this political right acquired in 1919 had a long-term impact on Luxembourg society and whether the inclusion of women on national and municipal election lists and in non-profit organisations continued after 1919. In 1928, Catherine Schleimer-Kill from Esch proposed a list of candidates composed entirely of women, and she secured a seat on the municipal council. But it was not until the 1960s that women began to occupy the roles of minister, MP and mayor. How did things develop in the Luxembourg judiciary? Simone Flammang explains that it took a long time to get the ball rolling. Although Marguerite Welter was the first barrister to be sworn in in Luxembourg, as soon as she got married she left the profession to look after her family. And it would be several decades before the male-dominated legal community really opened up to women. By 2019, the situation had been reversed – also among the ranks of judges.

The role of feminists

Drawing on the archives of the Women’s Liberation Movement (MLF) and the “CID-Fraen a Gender” documentation centre, Isabelle Schmoetten gave a presentation in images showing how attitudes, language and the preoccupations of feminist groups, associations and society in general have changed over time. In 2019, we insisted on parity, gender equality, respect for fundamental rights and the freedom to be oneself, with the Me Too movement awakening public consciousness.

Two thirds of the hundred or so participants then followed the speakers for their respective workshops. Viviane Thill and Anne Schroeder offered a film analysis session. Vera Fritz and Dominique Santana proposed finding out more about the authors of (not necessarily feminist) historical sources. And Mirka Costanzi organised a role play game, inviting the “actors” to take part in the 1940 debate on the loss or acquisition of Luxembourgish nationality by women when they got married. The re-enactment of the discussions was played out in an improvised Chamber of Deputies!

The Digital History Advanced Research Projects Accelerator (DHARPA) adds a new dimension to the research activities of the C²DH by focusing on R&D. → read more

Media Monitoring of the past

Using text mining and data visualisation to open up collections of digitised historical newspapers for research. Since its launch in 2017, impresso has developed a methodologically-reflected technological framework to enable new ways of engaging with the multilingual digital content of historical newspapers and new approaches to address historical questions. → read more

Confronting the Digital Turn in the Humanities

As a result of the “digital turn”, the humanities are currently in a process of rapid transformation, with consequences that reach far beyond the confines of academia. → read more

Technological Pasts in the Digital Age

Under the term “digital history”, historians have experimented with tools, concepts and methods from other disciplines, mostly computer science and computational linguistics, to benefit the historical discipline. → read more